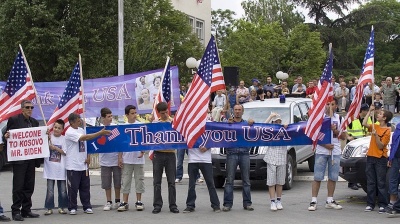 Kosovans welcoming then US vice president Joe Biden on his visit in 2009.
By Clare Nuttall in Glasgow January 19, 2021

If the outgoing Trump administration sought to score points against the EU in the Western Balkans and ignored the complexities of Balkan politics in favour of winning a quick foreign policy triumph, his successor Joe Biden can be expected to do more or less the opposite.

Biden’s much publicised history in the region goes back to the 1970s when he attended the funeral of politician and economist Edward Kardelj as part of a high-level US delegation, meeting afterwards with Yugoslav leader Josip Broz Tito. When Yugoslavia disintegrated in the 1990s, he pushed for the US to intervene first in Bosnia & Herzegovina and later in Kosovo. As Barack Obama’s vice president from 2008-2016, he took part in the peace process between Serbia and Kosovo.

As he takes power on January 20, faced with the pandemic that has claimed almost 400,000 lives in the US, violent extremists within his country still seething at the election result, a much deteriorated relationship with major European powers and challenges from Russia and China, the Western Balkan region is unlikely to be high on Biden’s agenda.

Yet the problems of the last few decades remain unresolved, and new disputes are surfacing. The conflict between Belgrade and Pristina is outstanding, stymying both countries’ progress towards EU accession. Tensions and a questioning of the Dayton Accord that ended the Bosnian wars of the 1990s have been growing in Bosnia, where Milorad Dodik, the Serb member of the country’s tripartite presidency, has repeatedly challenged the existence of the Bosnian state itself, calling for the secession of the Serb entity Republika Srpska. A new rift has opened up in the last few months as Bulgaria vetoed the start of accession talks for North Macedonia when fellow EU members refused to accept conditions Sofia wanted to set concerning the Macedonian language and identity.

The Southeast Europe region — which also spans staunch US ally Romania, prosperous Slovenia, the birthplace of current US first lady Melania Trump, and small EU-aspiring states like Montenegro and Albania — is therefore in need of more strategic attention than was offered by the Trump White House.

Admittedly, the appointment of the then US ambassador to Germany Richard Grenell as Washington’s special envoy for the Serbia-Kosovo conflict was seen as a chance to revitalise efforts to resolve the conflict after it had been largely ignored in Washington for years. However, while there were some early positive announcements about road, rail and air transport in early 2020, they were followed by more controversial steps, including reports that Grenell had backed the no-confidence movement against the former Kosovan government led by the leftwing nationalist Vetevendosje.

Overall, the Trump approach to the Western Balkans was one of self interest: Facing a re-election battle in November 2020, Trump was in need of a foreign policy win and saw the conflict between Serbia and Kosovo — despite its long and complex history — as a way to achieve this.

An economic normalisation agreement between the two was announced at a summit in Washington two months before the US presidential election, but while it was heralded by the White House as a breakthrough, it actually brought together a mixed bag of agreements, some of dubious benefit to the two sides, not least a commitment to move their Israel embassies to Jerusalem in defiance of EU policy on the issue.

Amid an anticipated reset of EU-US relations, the Western Balkans can expect a realignment of the approaches from the two main western powers. The Biden administration is expected to work alongside rather than in competition with the EU, which will give more clout to Brussels’ special representative for Serbia and Kosovo conflict Miroslav Lajcak — though little can be done until the current political vacuum in Pristina is filled.

Both Russia and China see the Balkans as an area to extend and defend their interests — China in particular has announced numerous investments in the transport and energy infrastructure sectors. Biden is likely to lead a more coherent policy on Russia than Trump did, though his administration is not seen diverging significantly from Trump’s in its policy on China. Under Trump, for example, the US stepped up its efforts to persuade Central and Southeast European governments to limit the role of Chinese tech giants Huawei and ZTE in their mobile networks. Biden too has indicated he will take a tough line on China.

Where they differ is on the attitude towards democracy and the trend towards democratic backsliding in the region. Trump clearly admired nationalist strongmen like Turkey’s Recep Tayyip Erdogan and Russia’s Vladimir Putin, a predilection incompatible with the US’ usual position as self-appointed leader of the free world, and one which emboldened  politicians with authoritarian tendencies in the Balkans.

In stark contrast, Biden has a record of pushing US governments to stand up to dictators — such as former Serbian dictator Slobodan Milosevic. In his memoir he recalled calling the Serbian dictator a “damn war criminal” at a meeting in 2003 (later reports indicated he may have used less harsh language, but those present say his message was essentially the same).

Democratic backsliding has been a problem in the Western Balkans as local elites have become entrenched in power, and paid less attention to reforms when they became discouraged by the lack of progress toward EU accession.

Biden has said he plans a summit of democracy after taking over the presidency, amid a worrying shift away from democratisation in the US and elsewhere. In 2018, he spoke explicitly about his concerns over democracy in several Central and Southeast European countries, warning of populist governments “seeking to dismantle the checks and balances of the rule of law”.

Ahead of the November election, political leaders from much of the Central and Southeast Europe region were divided over who they wanted in the White House for the next four years. In Southeast Europe, vocal Trump supporters included rightwingers like Slovenian PM Janez Jansa and Nebojsa Medojevic of the Movement for Changes in Montenegro, as well as Dodik, who described the Democratic presidential candidate as a “Serb hater”.

Still, the reality is that the small and not particularly wealthy nations that make up Southeast Europe have no choice but to make the best of the new leadership in the US, which — with some hardline exceptions — is what has happened. Whether or not they welcome the incoming US president, the Western Balkans will at least see one of the big powers with an interest in their region led by a politician with a deep understanding of its issues.