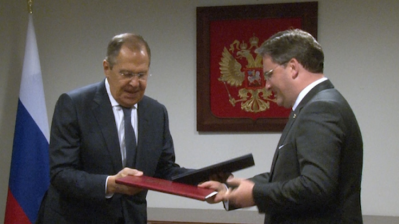 The foreign ministers of Russia and Serbia, Sergei Lavrov and Nikola Selakovic, signed a foreign policy consultation plan on the sidelines of the UN General Assembly in September. / mfa.gov.rs
By Clare Nuttall in Glasgow October 5, 2022

Serbia is infuriating the EU and putting its accession progress at risk with its mixed messages over relations with Russia, but this is part of a deliberate strategy aimed at the ruling Serbian Progressive Party’s (SNS) broad support base.

Over the last few weeks there have been a lot of different messages coming from Serbian officials, which follow on from months – ever since Russia’s invasion of Ukraine in February – during which Belgrade has insisted it wants EU membership but that it will remain neutral and not impose sanctions on Russia. This position has become increasingly unacceptable to the EU.

Over the weekend of September 12-18 the EuroPride 2022 parade took place in Belgrade, in what can be interpreted as a victory for holders of Western liberal values in the country and those that see it as having an EU future. The parade took place following a lengthy saga of counter-protests by right-wingers, an initial ban explained as being for participants’ safety, pressure from within Serbia and its Western partners to overturn it, and a last-minute decision to allow the march to go ahead.

Credit for allowing the march to go ahead rests with the government in Belgrade – which stood up to opposition from a substantial swathe of the Serbian population (including many who were likely to be SNS voters) – and also with the thousands of police officers deployed to protect participants. President Aleksandar Vucic said in the run-up to the march that the dispute was part of a ‘proxy war’ being fought in Serbia. Given the opposition was led by the Serbian Orthodox Church (which is close to the Russian Orthodox Church, which in turn is close to the Kremlin) and that many of those in the anti-Pride protests carried Russian flags and portraits of Russian President Vladimir Putin, it can be seen as standing up against Russia as much as against segments of Serbia’s own population. As a bne IntelliNews commentator wrote at the time, “anyone who tries to deny that [the EuroPride] walk was a victory doesn’t really understand the circumstances”.

Then, a week later, came the UN General Assembly (UNGA) in New York on September 21-23, coinciding with Russia’s organisation of referenda in occupied parts of Ukraine that asked their populations – some of them forced to polling stations at gunpoint – to vote on annexation to the Russian Federation. The annexation of the four regions has since been formalised.

Here the messages sent from Belgrade were more mixed. Both Vucic in his speech to the assembly and Foreign Minister Nikola Selakovic at a press briefing said that Belgrade could not accept the results of the referenda.

Selakovic later elaborated that to accept the referenda "would be completely contrary to our national interests, our policy of preserving territorial integrity and sovereignty and commitment to the principle of inviolability of borders”.

However, during the same general assembly, a consultation plan for the years 2023-2024 was signed by the foreign ministers of Russia and Serbia, Sergei Lavrov and Selakovic. At a press conference on September 25, Selakovic appeared to downplay the importance of the document, calling it a “technical matter” and pointing out that such documents have been signed since 1996.

That didn’t cut any ice with EU officials or MEPs, and sparked an immediate backlash as well as calls by some MEPs for Serbia’s EU accession progress to be frozen.

European Commission spokesperson Peter Stano told journalists on September 26 that the document was "a very clear sign about their [Serbia’s and Russia’s] intention to strengthen their ties”. “[T]his is raising serious questions,” he added.

MEPs took an even stronger tone. The European Parliament's rapporteur on Serbia, Vladimir Bilcik, wrote in response to the signing of the agreement: “As a keen supporter of any steps towards a European Serbia, I find the news of planned consultations between Serbia and Russia a major blow to accession process in the Western Balkans. Let’s be clear: Russia is mobilising to attack EU candidate state Ukraine, Russia is attacking EU enlargement!”

European Parliament rapporteur for Kosovo Viola von Cramon also commented on the development on Twitter, linking it to Serbia’s EU accession process. “This is a serious scandal. In the midst of raging war, the Ministry of Foreign Affairs in Serbia signs the plan on future collaboration with the Russian aggressor. Or maybe it’s just a signal for us to freeze the EU accession talks, as entering the EU does not go through Moscow,” she wrote.

The signing of the document, well publicised on the Serbian foreign ministry website, and its timing was most likely a deliberate move on the part of the Serbian authorities to balance their condemnation of the referenda with a signal that they are still working with Russia.

Vucic has consistently said there will be no change on Serbia’s policy towards Russia, despite speculation that Belgrade might decide to impose sanctions once the April general and presidential elections were out of the way. Instead, Vucic used his post-election speech to supporters to stress that Serbia will not turn its back on “old friends”.

This is a continuation of the international balancing act successive Serbian governments have pursued under which Serbia seeks good relations with the EU, the US, Russia and China. This has allowed Serbia to pursue the goal of EU accession while at the same time letting it benefit from Chinese infrastructure and industry investment, as well as from Russian political support in keeping Kosovo out of the UN and other international organisations.

While Vucic has made the overall direction of Serbian foreign policy clear, there have been a variety of other messages coming out of Belgrade. These are in line wth the ruling SNS’s strategy of keeping a broad base of support, not only by working with coalition partners of various stripes but also allowing different voices from within and close to the party and ruling coalition to appeal to different people. The signing of the consultation plan with the Russia foreign ministry, for example, sent the signal that Serbia is not moving decisively towards the West, despite its decision not to recognise the referenda in Ukraine.

There remains a strong pro-Russian contingent in Serbia. This was evident in June when Russian President Vladimir Putin was voted the most popular world leader. The same poll, by Demostat, also revealed very strong sympathy towards Russia despite the invasion of Ukraine in February.

Even within the cabinet, there are pro-Russian and pro-Western voices. This was clear in August, when Energy and Mining Minister Zorana Mihajlovic criticised Lavrov after Interior Minister Aleksandar Vulin’s visit to Moscow, accusing the Russian foreign minister of “abusing” Serbia’s decision not to impose sanctions on Russia by falsely claiming Serbia supports Russia's invasion of Ukraine. She has since called for deeper relations with the US.

Vulin, on the other hand, is one of the more pro-Russian members of the Serbian cabinet. He responded sharply to Bilcik on September 25. “[T]he territorial integrity of Serbia is being attacked by 22 member states of the European Union, recognising the fake state of Kosovo. Let's face it, this is a big blow to Serbia's European path,” said Vulin, as quoted by N1. “[T]o be clear, Serbia chooses its friends, and its enemies make themselves known,” he added.

Why Serbia can’t give up on Russia

It is Russia’s support over the Kosovo issue, and the overwhelming public sentiment this creates in favour of Russia, that is the prime factor in keeping Serbia locked into Moscow’s orbit. Russia has used its position as a permanent member of the UN Security Council to block Kosovo – which unilaterally declared independence from Serbia in 2008 – from joining the UN, and has long been Serbia’s staunchest backer on the issue. Serbian politicians also look back to Russia’s support during the sanctions imposed during the wars of the 1990s and the Nato bombings of Serbia and Montenegro in 1999.

Vucic used part of his speech to the UNGA to complain of the different treatment of Serbia over Kosovo (leaving out the repression of Kosovo Albanians under former dictator Slobodan Milosevic) compared to the support for Ukraine. “[T]he truth, that for the first time the integrity of a country in Europe was violated, namely Serbia, which did not attack any other sovereign country, is persistently kept silent,” he said.

If Russia were to stop supporting Serbia over Kosovo then everything would change. This became evident in April when Serbia’s usually pro-Russian tabloids suddenly turned on Russian President Vladimir Putin after he hinted that Moscow might give up its support for Serbia on the Kosovo issue. Specifically, Putin talked of Kosovo’s declaration of independence as a precedent for the two self-declared republics in Ukraine’s Donbas region, raising fears in Serbia that Moscow was changing its position to secure its own goals in Ukraine. Moscow was quick to reassure Serbia, but the referenda in occupied parts of Ukraine on splitting from Ukraine and joining Russia again raises uncomfortable issues in Belgrade.