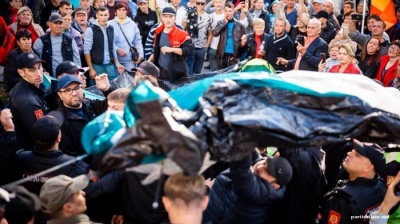 Protesters set up tents at an anti-government rally organised by the Shor Party in September.
By Iulian Ernst in Bucharest November 17, 2022

“It is always easier to fight for one’s principles than to live up to them,” once said Alfred Adler, the Austrian psychotherapist of the early 20th century.

The quotation from Adler, considered the first community psychologist, is very relevant for Moldova’s pro-EU authorities that are now in control of all state institutions. Indeed it is just as relevant for all post-communist regimes that seek to carry out justice reforms using limited instruments and within the clear constraints of democracy.

Just as they suspended head anticorruption prosecutor Alexandr Stoianoglo more than a year ago based on superficial accusations sketched overnight by one of their MPs (the MP later admitted she drew them up based on media reports), President Maia Sandu’s Party of Action and Solidarity (PAS) gives the impression that it now wants to ban overnight the Shor Party (and the Socialist Party too if possible), close down the website that published leaked conversations between Minister of Justice Sergei Litvinenco and his partners in the Superior Council of Prosecutors (CSP) and jail those involved in the plot for life.

The conversations published by Moldova-Leaks.com focus on how PAS representatives on the CSP coordinated to help their candidate win the contest to become the head anticorruption prosecutor. It is not clear whether their actions were critical for the result of the contest — but this doesn’t matter. It was not the contest for the head of the customs or environmental agency, nor for the manager of the public parks in Chisinau (pretty important positions as well), but for the person who was supposed to lead the national fight against corruption.

Veronica Dragalin, the candidate allegedly promoted by Litvinenco and his partners on the CSP, has the best possible background and credibility. But for some reason, this was not enough for Litvinenco who, by his actions, showed he was the first to doubt her merits. And why he never thought she would be able to win the position on merit alone is relevant for the way Moldova’s pro-EU authorities think and work. Dragalin has not commented on the leaked conversations. But her mission against “perceived corruption” has just become more complicated.

She was selected by the same CSP that was “deeply restructured” (including by changing its functioning law) with the purpose of making it easier to give a negative evaluation of Stoianoglo and eventually allow his dismissal. At this moment Sandu is still evaluating whether this would be a wise step.

Adler’s work stressed the importance of nurturing feelings of belonging and striving for superiority.

His work would serve the authorities in Chisinau, who face street protests. Blaming Shor Party leader Ilan Shor is the most obvious and easiest thing to do — and Dragalin is taking steps to dismantle the organisation behind the weekly protests in Chisinau. But this has its drawbacks (banning political parties is a shortcut to autocracy) and it is nowhere near enough to stop the protests. Sandu’s mission is to address those protesters who are not paid by Shor — and their number is increasing in direct proportion to the gas and electricity price.

The thousands of people who gather on the streets of Chisinau and other cities each weekend, along with the leaked Telegram conversations that appear to reveal political control over the judiciary prompted the pro-EU authorities in Chisinau to take radical steps against opposition parties and figures that are seen as threats.

The government seeks to ban the Shor Party and scrutinise the financial affairs of all the collaborators of fugitive businessmen and politicians Shor and Vlad Plahotniuc, as well as the collaborators of Igor Chaika, the Russian business partner of former president Igor Dodon’s brother.

In separate developments that should in principle not be linked to the executive or legislative branches, or to the pro-EU political parties, prosecutors searched the headquarters of the Socialist Party (PSRM) on November 11 to collect new evidence regarding the party’s illegal financing.

The accusations against the PSRM are similar to those against the Shor Party: illegal financing from criminal groups and money laundering. However, a request to ban the PSRM as well would prompt concerns among independent civic society NGOs that already flagged up problematic decisions taken by the pro-EU authorities.

Not a mere NGO, the Venice Commission has criticised Moldova’s pro-EU authorities over the content of the CSP law and the way it was amended. The PAS amended the law so as to give the CSP the right to subjectively evaluate head prosecutors, which opens the door to political interference.

Banning the Shor Party (a measure currently under evaluation by the Constitutional Court at the request of the government) is an even more risky step that may be seen as restricting freedom of expression. The Shor Party may be a political vehicle for Ilan Shor, but political parties, in general, are entities that are distinct from their members or leaders.

“There is a decision of the Venice Commission on the outlawing of political parties, which calls on the member states to be very careful about this,” explained Igor Botan, executive director of the Association for Participatory Democracy (ADEPT), last year — at the time the pro-EU authorities were considering banning Shor’s party for the first time.

Even if Ilan Shor is given a final sentence for involvement in the so-called ‘$1bn bank frauds’, and prosecutors manage to demonstrate that money stolen by Shor was used to finance the party, this would not be enough for the Constitutional Court to ban the party, he explained.

Moldova Leaks is the most significant negative development, after the weekly rallies organised by Shor Party and PSRM, used by the opposition parties (or rather their hidden supporters) for the pro-EU authorities.

The latest bundle of conversations include alleged evidence of arrangements being made under the table to appoint Dragalin.

Igor Munteanu, former diplomat and founder of independent think-tank Viitorul, more recently the founder of pro-EU, pro-Nato party CUB, has suggested that the authenticity of the conversations published should be checked — and the evidence should be carefully evaluated, if valid.

Speaking of Munteanu, he and his party are relevant for the third line of attack developed by the opposition in Moldova. A growing number of political parties of self-declared pro-EU orientation are expressing views that undermine the credibility of the pro-EU authorities or create a state of tension.

Sandu and Prime Minister Natalia Gavrilita say they have evidence Shor’s rallies are supported by Russia, but it is unclear how many other politicians have Russia links.

Muntean recently suggested that it is the right time for Moldova to take aggressive steps against the separatist Transnistria region, by blocking all natural gas supplies to the region. In contrast, the authorities in Chisinau managed to maintain constant negotiations with Transnistria, which, until it refused to supply electricity after November 1, also avoided any escalation. Sandu and her party have constantly argued for a peaceful settlement of the situation in Transnistria.

Munteanu and his party also called for Gavrilita's government to resign, questioning its good faith.

Former PM candidate Mariana Durlesteanu (who previously ran on the PAS ticket) is another politician of self-declared pro-EU and democratic orientation planning to set up her own party. In 2021, Durlesteanu refused the PM nomination just in time to allow then president Dodon to appoint his own candidate. She has also criticised the pro-EU authorities.

Other parties are being prepared with a view of supporting Moldova’s “statality” — an ideology meaning bilateral ties with Russia and the EU but not EU membership. One such party is Statalitate, with a low-profile leadership, linked by media to Russia.

Chisinau mayor Ion Ceban, a former Socialist Party member, also is also en route to setting up his own party. Ceban became mayor of Chisinau after a controversial court decision disqualified his pro-EU rival — even though the latter got more votes.

None of the new parties already set up has a demonstrated tie with Russia, but all of them are criticising the methods used by the current pro-EU authorities, with a particular focus on the government’s results in the year since it took office.

BALKAN BLOG: What Turkey’s Erdogan can offer the Western Balkans