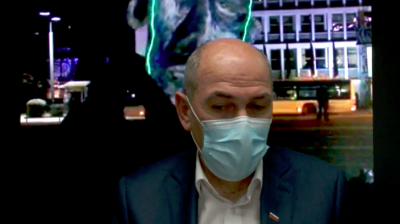 It was supposed to be a chance for members of the European Parliament to discuss the state of media freedom in Slovenia via video link. Instead, after a dispute with moderator MEP Sophie in ‘t Veld over whether a video from the Slovenian government could be streamed, Prime Minister Janez Jansa abruptly disappeared before MEPs could ask him questions about the situation in his country.

Jansa has faced growing criticism both from within Slovenia and at European level, being accused of undermining media freedom as well as restricting freedom of expression since his rightwing government came to power in early 2020.

The debate was organised by the European Parliament’s Democracy, Rule of Law and Fundamental Rights Monitoring Group (DRFMG) on March 26 after the state of media freedom in Slovenia, Hungary and Poland was discussed at a European Parliament plenary session earlier in the month.

One of the main concerns has been the cutting off of funding for the Slovenian Press Agency (STA), which followed accusations by Jansa of unfair reporting. The prime minister called the agency, which receives a substantial part of its funding from the state, a “disgrace”.

A prolific and outspoken tweeter, Jansa has not limited his criticisms to STA, also accusing public broadcaster Radiotelevizija Slovenija (RTV) of spreading lies, and singling out Politico reporter Lili Bayer over the publication of her story “Inside Slovenia’s war on the media”, in which she quoted journalists and watchdogs as saying Jansa was creating a climate of fear in the media.

“Well, @liliebayer was instructed not to tell the truth, so she quoted mainly ‘unknown’ sources from the extreme left and purposely neglected sources with names and integrity,” Jansa tweeted in February.

This earned the Slovenian PM a rebuke from the European Commission. “We condemn any attacks on journalists. We would not do that in Brussels and we do not expect others to indulge in such practices,” European Commission chief spokesman Eric Mamer told Reuters when asked about Jansa's tweet.

Earlier this month, at the debate in the European Parliament on media in Poland, Hungary and Slovenia, European Commission Vice-President for Values and Transparency Vera Jourova spoke of continuous attempts by the Slovenian government to undermine the sustainable funding and the independence of the STA, and noted that frequent verbal attacks against journalists in the country were a cause for concern.

Media freedom organisations have also sought to focus the attention of the European Union on the situation in Slovenia. Six organisations sent a letter to European Commission President Ursula von der Leyen on March 16, describing the “repeated denigration” of journalists, the ruling party’s attempts to exert greater control over the public service media, that together “are creating an increasingly hostile climate for critical reporting which serves its fundamental role of holding the government to account”.

“Since returning to power in early 2020, we have monitored closely as Prime Minister Jansa has increasingly employed Trumpian-style tactics of attacking journalists on Twitter and dismissing critical reporting as ‘fake news’,” the International Press Institute (IPI) said.

Starting out, Barbara Strukelj, editor-in-chief of the STA, said that Slovenia is not honouring its obligation to finance the STA, even though the agency is performing its public service duty. “STA has not received a single euro in 2021 for the performance of public service, which is almost half of the agency’s total revenue. STA and its directors are also the subject of targeted discreditation, especially on social media with allegations of lying or manipulating even when we are simply reporting on events or statements critical of the government,” Strukelj told MEPs.

Natasa Pirc Musar, a lawyer specialising in media law, also criticised the government and said the curbs on media freedom are just part of the problem.

On the other hand, Jansa got support from Igor Pirkovic of the Association of Journalists and Publicists, who said that the media in Slovenia have never been as free as they are now and that there has never been so much criticism of the government. Employing an argument also used by the prime minister, Pirkovic implied that those outside Slovenia don’t understand the situation within the country and urged MEPs to visit and see for themselves.

The final panel was for Jansa and Simoniti to put their position to MEPs, but after some brief comments Jansa instead said he wanted a 16-minute video on the issue to be streamed.

There followed a dispute over whether the video could be streamed, with in ‘t Veld saying it had been received immediately before the session began and Parliament officials had therefore been unable to examine its content, while Jansa said it had been sent three hours earlier and implied it was censored. “If we are talking about free media, I would like you to defend free media,” he said.

Both Jansa and Simoniti then disappeared from the discussion.

“[Jansa] has disconnected, so I take it that the session was not to his liking. I’m sorry he feels that way,” commented in ‘t Veld.

“It is truly unfortunate that Sophie in ‘t Veld, who supposed to monitor media freedom in the EU, despite prior agreement censored the broadcast of a video that highlights problems with media freedom and attacks on journalists in Slovenia,” Jansa tweeted after the event.

On top of the criticisms of the attacks on the STA and individual journalists, opponents of the Slovenian government fear that Jansa has used the pandemic as an excuse to curb freedom of expression, which led to weeks of Friday night protests last summer in which people took part on bicycles in Ljubljana and other cities. Other developments include the removals of the heads of several of the country's main museums since Jansa’s new government came to power.

All this has led to speculation that Slovenia is in the midst of a culture war, and is heading down the same illiberal path as Hungary and Poland, putting it on a collision course with EU institutions.

Both Hungary and Poland have clashed repeatedly with EU officials. Article 7 proceedings have been launched against the two states in the last few years. However, both have said they will use their veto to block sanctions against the other.

Until recently Slovenia has been a small and (despite a severe debt crisis a decade ago) quietly prosperous member of the EU. The richest of the new EU members, it was the first to join the eurozone, and generally does very well on quality of life and human development indicators.

Yet like his Hungarian counterpart Viktor Orban, a close ally, Jansa has become increasingly critical of EU officials dictating to its eastern members.

During the autumn 2020 row over the plans to tie funding to respect for the rule of law that threatened to block adoption of the EU’s next seven-year budget and coronavirus (COVID-19) recovery fund, Jansa didn’t join the veto by Hungary and Poland. However, the Slovenian premier spoke out in defence of the two rebel states.

"Today, some political groups in the European Parliament openly threaten to use an instrument incorrectly called the 'rule of law' to discipline individual member states by a majority vote," Jansa said in a letter, according to Delo. "Those of us who have spent part of our lives under totalitarian regimes know that deviation from reality begins when processes or institutions are given names that mean the exact opposite of their essence," he added. This is a familiar theme from Jansa, who has frequently highlighted attacks on media freedom from the far left.

Earlier this month, Orban’s Fidesz Party left the European People’s Party (EPP), putting an end to years of tense relations with the pan-European centre-right bloc. MEPs from Fidesz quit soon after the EPP approved a rule change that paved the way for them to be suspended from its ranks. Among those who voted against the changes were members of Jansa’s Slovenian Democratic Party (SDS), raising the question of whether they might pull out of the EPP too.

The increasingly confrontational relationship between Jansa’s SDS and European institutions comes at a time when Slovenia is preparing to take over the six-month rotating presidency of the union in the second half of 2021. The government’s confrontational relationship with the media – and indeed with the opposition – highlights the rift over the values of European states and the extent to which they should be shared across the bloc. There is no easy way to bridge it.