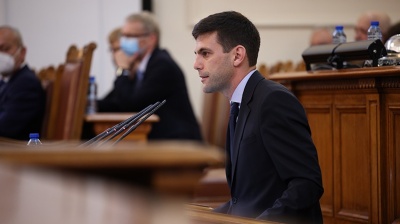 Hope for the future was tinged with wariness as Bulgaria’s new parliament held its first session on December 3, electing the youngest-ever speaker, with one observer saying the new cohort of MPs, many of them also youthful, looked as if they were on their way to summer camp.

There was optimism that the new parliament — elected in Bulgaria’s third general election this year — will bring positive changes and set the country’s path towards the rule of law and in-depth reforms in key areas, including the judiciary.

However, there is also uncertainty as the four political parties that have been holding coalition talks are yet to sign a formal agreement despite expectations this would happen before the first session of the parliament.

"May the common will be born in the quality and reasonable discussion in parliament. May we work to restore the spirit of mutual understanding and to impose a new model of policymaking in the 47th Bulgarian parliament, within a full four-year term,” the new speaker said in his first speech after being elected.

The election of such a young professional who had a career in one of the biggest law firms in the country was seen as a sign that a new generation, that of young people in their 30s and 40s, is now in charge and can actually bring a real change in politics with its energy and fresh ideas.

“What I saw today in the National Assembly looked like sending young people to summer camp. Seemingly parliament, but [it felt like the] train station. Youngsters are going to the summer camp in the mountain and fathers, mothers, grandmothers and grandfathers are sending them. … And I am crossing my fingers and feeling afraid,” Mariya Stoicheva, a mother of three, wrote on Facebook. She added she was hopeful things can change in a positive direction.

Petkov’s speech in parliament was rather emotional and called on MPs to set aside greed, egoism and carelessness. Petkov once again said his formation would work towards zero tolerance for corruption.

“It is a time for real justice in which no one feels unpunishable. A time to overcome our personal ego and work together. It is time for a prosperous Bulgaria,” Petkov said.

He also said that he has seen significant problems such as roads in bad condition, high electricity prices, illegal waste landfills and damage to the environment.

"Where were the MPs who should have solved these problems? The answer lies in just a few words — greed, selfishness and carelessness, not for all, but many of them. Maybachs, Rolls-Royces, Ferraris are moving on our broken roads. But they are not driven by successful competitive business leaders, but belong to people related to those in power. This must stop today," he said.

The leader of the Bulgarian Socialist Party (BSP) Kornelia Ninova said that her party’s priorities would be to reform the model of ruling the country, social policy and pro-European foreign policy.

The BSP is one of the parties in talks on a new coalition. However, there are rumours that the signing of the deal has been delayed due to Ninova’s demands for a lucrative post.

As for the other expected members of the coalition, There Are Such People (ITN) has indicated it would seek compromise with the other parties. Democratic Bulgaria, the fourth party participating in the coalition talks, is also willing to find a compromise.