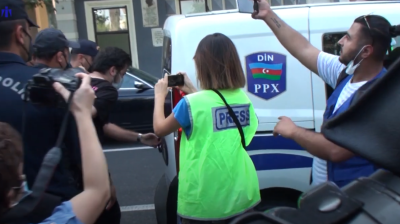 Protesters were hauled off in Baku after shouting for the freedom of Tofig Yagublu.
By bne IntelIiNews September 9, 2020

Police in Baku arrested dozens of protesters and some journalists at a demonstration called in support of hunger-striking opposition politician Tofig Yagublu, who was convicted on “hooliganism” charges earlier this week, Turan and OC Media reported on September 9.

Dozens gathered in support of Yagublu, 59, who leads the Musavat Party and is a senior politician in the National Council of Democratic Forces. He has been on hunger strike since September 2, alleging fabricated charges were pressed against him following a car accident.

The mid-afternoon protest was meant to occur in front of the Constitutional Court in Baku, but security forces and police were standing by at the entrances to the site, blocking off the protesters. Police reportedly immediately detained everyone who had assembled. Police grabbed some protesters who shouted "Freedom for Tofig Yagublu!" Some of the detained had pictures of the politician on their t-shirts.

Reports from the ground said that more than 30 people were put in buses and patrol cars before being taken away for questioning.

Yagublu, a critic of the autocratic Aliyev administration, has long been on the radar of the president, ruler of 17 years Ilham Aliyev, who is accused of using the lockdown required by the coronavirus pandemic to move against opponents.

Yagublu was accused in court of attacking another motorist with a wrench. He denied the allegation, saying he was sitting in his car when another car simply crashed into him. A sentence of four years and three months in prison was handed down.

The lawyer of Yagublu, Aqil Layic, told RFE/RL on September 7 that the politician was being pressured to confess to nonexistent psychological problems to explain his hunger strike.

Yagublu spent 14 months in prison in 2013-14 on charges widely dismissed as politically motivated. He was also sentenced to several days in jail in October 2019 after an opposition rally, during which he claims he was tortured in custody.

There has lately been a string of arrests of critics of the Azerbaijani regime. The Council of Europe and the US have appealed to Azerbaijan to release Yagublu.