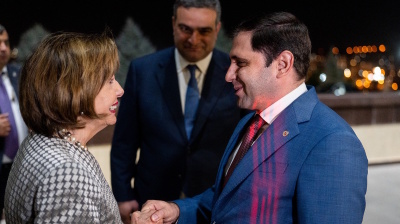 US House of Representatives Speaker Nancy Pelosi has strongly criticised Azerbaijan over its "illegal and deadly" incursion into Armenia last weekend, in comments made during her visit to Armenia on September 18.

"[There were] illegal and deadly attacks by Azerbaijan on Armenian territory. We strongly condemn those attacks. This was initiated by the Azerbaijanis and there has to be recognition of that," Pelosi said.

Regarding possible military assistance and security guarantees for Armenia, Pelosi said:  "We want to do whatever we can to be more supportive of Armenian security, and that we will work to see what can be done by the US to help with Armenian security."

She also touched upon Armenia's membership in the Russian-led military block, Collective Security Treaty Organisation (CSTO). "Relations with other entities are up to Armenia to decide," she said, but "it is interesting that they were disappointed they got fact finders and not protection from that relationship and we'll see what happens next," concluded Pelosi.

The MFA of Azerbaijan said that "the incident that occurred on the conditional border, the delimitation of which has not yet been carried out, on the night of September 12-13 this year, is a large-scale military provocation by Armenia against Azerbaijan. The armed forces of Azerbaijan prevented a provocation and ensured the protection of the sovereignty and territorial integrity of our country. At present, the ceasefire regime is observed, and it was possible to prevent the situation from aggravating. All responsibility for the aggravation of the situation in the region and a large-scale provocation lies with the military-political leadership of Armenia," the Azerbaijani foreign ministry added.

MFA even labelled Pelosi a known pro-Armenian politician, which "clearly shows the presence of pro-Armenian members of Congress in her delegation."

The MFA connected Pelosi's visit to American domestic politics as well. "Given that the period of the midterm elections to Congress is approaching, Pelosi will use this visit for her domestic political agenda and in order to enlist the support of the Armenian lobbying circles in the United States," the foreign ministry said.

The foreign ministry believes that what Pelosi said in Armenia should be regarded as a statement made on the basis of Armenian propaganda. "This is a serious blow to efforts to normalise relations between Armenia and Azerbaijan," the foreign ministry said. "Such unilateral steps and groundless statements serve not to strengthen the fragile peace in the region, but, on the contrary, to escalate tension," the Azerbaijani foreign ministry added.

"Her visit to Armenia is related to domestic politics in the state of California, where there are many Armenian-American voters," Richard Kauzlarich, former American ambassador to Azerbaijan, said in an interview with BBC Azerbaijani.