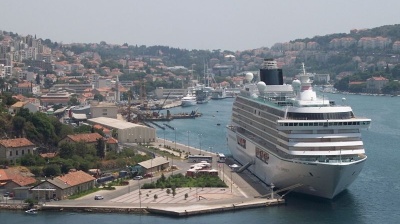 A giant cruise ships docks at the historic Croatian city of Dubrovnik.
By Clare Nuttall in Glasgow June 13, 2019

An award winning Croatian tour company announced on June 12 it will no longer work with cruise companies or their passengers. The strongly worded statement from Secret Dalmatia talked of the pollution caused by cruise ships and the “suffering” of local residents as thousands disembark in Croatia’s historic Adriatic ports.

“Cities are rightly banning dirty diesel cars but they’re giving a free pass to cruise companies that spew out toxic fumes that do immeasurable harm both to those on board and on nearby shores.”

The study looks at emissions of SOx, ultrafine particles (PM2.5) and nitrogen oxides (NOx), which, it says, cause premature death, including from lung cancer and cardiovascular disease, and lead to childhood asthma.

It analysed 203 cruise ships that sailed in the exclusive economic zones (EEZs) of European countries in 2017, based on satellite data on ship movements, finding that the cruise ships monitored emitted about 62 kilotonnes (kt) of SOx, 155 kt of NOX, 10 kt of PM and more than 10 megatonnes (Mt) of carbon dioxide in 2017.

“Most of these emissions (especially SOX) took place in the Mediterranean Sea and other major touristic destinations, but also along the coasts of the key member states where cruise ships depart from/terminate at or operate around,” says the report.

The title of the report, “One corporation to pollute them all” refers to the world’s biggest cruise company, Carnival Corporation, which according to T&E emits 10 times more SOx than all of Europe’s 260mn cars. The second largest cruise operator, Royal Caribbean Cruises, emits four times as much SOx as the European car fleet.

In the report, T&E recommends a zero-emission berth standard for all European ports, and “extra stringent” air pollution standards for cruise ships.

In absolute terms, the Spanish coast is the most exposed to cruise ship air pollution, receiving about about 15 kt of SOx a year, and the Spanish city of Barcelona received the heaviest load of Sox pollution of any city studied.

However, among continental European nations, Croatia is the worst affected relative to the country’s car emissions; cruise ship emissions were 189.6 times as high as those from cars. Three Croatian cities are among the top 50 cruise polluted cities in Europe: Rijeka (where cruise ships cause 12.3 times as much SOx pollution as passenger cars), Dubrovnik (19.2 times) and Split (4.8 times).

Other small Adriatic countries have a similarly disproportionate polluting impact from cruise ships, which account for 147.7 times the amount SOx emissions from passenger cars in Albania and 135.6 times in Montenegro. It’s a similar picture in Greece, Malta and Norway. Relative to car emissions, the worst affected overall was Iceland, where cruiser emissions exceeded passenger car emissions by 337.4 times.

Emissions of NOx are generally smaller than those from passenger vehicles, amounting to around 15% of total NOx emissions from Europe’s passenger car fleet. However, this isn’t true of all countries: in both Norway and Croatia cruise ships emit more than the entire domestic passenger car fleet — 144% and 111% respectively. In absolute terms, the highest levels of NOx emissions are along the Spanish and Italian coasts.

Pollution from huge cruise ships, coupled with worries about over-tourism in the centres of cities such as Rijeka, Split and especially Dubrovnik, have sparked a backlash in Croatia, even though the country depends on tourism for a substantial share of its GDP.

Dubrovnik mayor Mato Frankovic announced in December 2018 that the city was limiting the number of cruise ships allowed to dock to two per day with no more than 5,000 passengers between them. Long a popular destination for cruise ships, the city’s historic walled centre has been in danger of being overwhelmed by tourists, and received a further boost to its profile — and consequent hike in tourist numbers — as one of the locations in the HBO hit series Game of Thrones.

Secret Dalmatia, an award winning tour company in Croatia, has now taken a stand on the issue, despite a potential loss of custom.

“The consequences of cruise ship tourism in Croatia are becoming increasingly evident by the day. From crowds taking over the fragile World Heritage cities like Dubrovnik, to the local living suffering under the burden of thousands coming in at the same time, to the threats cruise ship pollution poses to our Adriatic Sea,” the company said on its Facebook page.

“As promoters, but primarily protectors of the Croatian heritage and environment, we have decided to forgo all types of cruise ship business in the future. … We strongly believe that it is us who benefit from Croatia’s beauty must be its front line of defence from overuse.”

LONG READ: The Growers - a handful of countries in New Europe are coping with the coronacrisis and are still expanding
New coronavirus cases decline across emerging Europe but the epidemic’s not over yet
Movie night at the airport