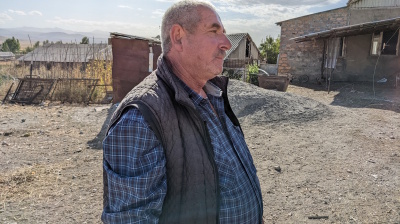 “When [the shelling] started, we jumped in the car and ran,” says Samvel, who has lived in the village of Sotk for the past three decades. / Neil Hauer, bne IntelliNews
By Neil Hauer in Sotk September 23, 2022

Samvel has lived in the village of Sotk for the past three decades. For most of that time, it was little different from any other village in Armenia: although it lies only eight kilometres from the border with Azerbaijan, the province just across the border, Kelbajar, was held by ethnic Armenian forces since 1993.

That is until 2020, when Azerbaijan’s victory in the Second Karabakh War saw it handed back to Baku’s control.

Now Sotk, and its inhabitants like Samvel, find themselves on the front lines of a potential new war, one whose first shots have already taken place on Armenian soil.

“There was a fire over there, after a shell hit it,” says Samvel, pointing at a pile of hay outside his house. “You can see the crater there. All the windows [on my house] are blown out,” he says.

Samvel was asleep with his family when the Azerbaijani artillery fire began, just after midnight on September 13.

“When [the shelling] started, we jumped in the car and ran,” he says. “We grabbed the kids and went to [the nearby city of] Vardenis.”

Like most of the population of Sotk, Samvel’s wife and two children have not yet returned to the village, which lies mostly empty. Only a handful of men remain to watch the livestock as the danger continues to loom.

Sotk is one of Armenia’s more remote villages, more than 100 km east of the capital Yerevan and southeast of Lake Sevan, which dominates eastern Armenia. That puts it directly in the line of Azerbaijani fire along the volatile border.

The attacks marked the first time in the three-decade conflict that such heavy fighting had taken place on the territory of Armenia itself, far from the still-disputed region of Nagorno-Karabakh.

By the time a fragile ceasefire was reached on the evening of September 14, at least 207 Armenian and 77 Azerbaijani soldiers were dead alongside 7,600 Armenian civilians displaced, while Azerbaijani forces had advanced 7.5 km into Armenian territory near the city of Jermuk.

The cause of the fighting appears to have been to force Yerevan into more concessions, specifically regarding the much-vaunted ‘Zangezur corridor’. Azerbaijan’s President Ilham Aliyev insists that point nine of the 2020 ceasefire agreement gives Baku access to a sovereign corridor connecting Azerbaijan proper with its exclave of Nakhchivan, an interpretation not supported by other parties.

“Azerbaijan’s main focus was the Jermuk area [in the latest assault],” says Benjamin Poghosyan, director of the Yerevan-based Centre for Political and Economic Strategic Studies. “This was preparation to physically open the corridor between Azerbaijan and Nakhchivan, via [Armenia’s] Vayots Dzor region,” Poghosyan says.

Baku has repeatedly used force in pursuit of its goals vis-a-vis Armenia and Karabakh in the past two years. Just last month, Azerbaijani forces opened fire on Karabakh Armenian troops in the area of the Lachin corridor, the vital artery connecting Armenia with Karabakh guarded by Russian peacekeepers.

Two Karabakh servicemen were killed and 18 wounded in the assault, which saw three Armenian-populated settlements in the corridor handed over to Azerbaijan in the following weeks, a year ahead of the deadline provided in the 2020 ceasefire agreement.

Strong resistance by the Armenian armed forces may have prevented what many think was an attempt by Azerbaijan to make greater gains in the recent fighting.

“The Armenian army performed quite strongly,” says Poghosyan. “Azerbaijan suffered significant losses, both human and equipment” as a result and was not able to advance as hoped, he says.

Just days after the fighting ended, Armenia received an unexpected source of international support – a visit to Yerevan by a US congressional delegation, headed by House Speaker Nancy Pelosi.

Pelosi was pointed in her remarks, condemning in an appearance alongside her Armenian counterpart Alen Simonyan the “illegal and deadly attacks by Azerbaijan on Armenian territory”. Pelosi went on to state that the US “should be using our influence, our leverage showing that Armenian democracy and sovereignty is a priority”.

Poghosyan, for his part, does not believe the US will play a significant role in dissuading Azerbaijan from future attacks.

“The US is not in a position to prevent Azerbaijan from launching a new attack,” Poghosyan said. “[Preventing a new war] can only be done if Armenia agrees to sign a peace on Azerbaijan’s terms, [including] a corridor [to Nakhchivan],” he added.

Armenia’s ally Russia was absent both during and following the Azerbaijani offensive. The Collective Treaty Security Organization (CSTO), a Russian-led military bloc of which Armenia is a member, declined Armenia’s invocation of the mutual defence clause in the organisation’s charter, deploying merely a ‘fact-finding mission’ instead.

Russian President Vladimir Putin met Aliyev in friendly conditions at a summit the next day, expressing only ‘concerns’ over the fighting.

That will come as cold comfort to those in the conflict areas themselves, like the now mostly abandoned village of Sotk. The tension in the air there is nearly palpable – en route to the village, checkpoints line the road, while military vehicles lie deployed in forested areas, to hide them from Azerbaijani aerial reconnaissance.

Meanwhile, the enemy – and the possibility of more war – is never far away.

“Look up there, at the top of the mountain,” Samvel, the Sotk resident, says, pointing at a peak perhaps 10 km distant. “You see the three white stones? That’s where [the Azerbaijanis] are. Watching us and waiting to kill us.”