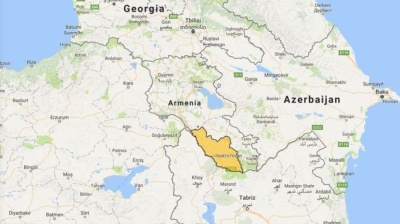 The Azerbaijani exclave of Nakhchivan borders Turkey to the west, Armenia to the east and north and Iran to the south. It is further cut off from Azerbaijan because Yerevan has no diplomatic relations with Baku or Ankara.
By bne IntelIiNews December 2, 2020

Azerbaijani President Ilham Aliyev is arguing for "a new five-sided cooperation platform” to be created that would back the establishment of a land transport corridor running from the Azerbaijani exclave of Nakhchivan, which borders Turkey, to Azerbaijan via Armenian territory.

A provision for such a corridor was made in the Russia-brokered peace deal that brought the six-week war between Armenia and Azerbaijan over the Nagorno-Karabakh enclave to an end in early November. No such corridor has been possible in recent decades given that there are no diplomatic relations between Armenia and Azerbaijan and Baku’s ally Turkey. Turkish-Azerbaijani trade has taken alternative routes via Georgia or Iran. Hence, Georgia and Iran will fear they will lose out from the creation of a link between Turkey and Azerbaijan via Nakhchivan and Armenia and Tehran will be concerned by any prospect of reduced trade access with Armenia and with markets such as Russia via Armenian routes.

"We are taking Nakhchivan out of the encirclement, at the same time opening a new transport artery. I can say that all countries will only benefit from this," Aliyev said in an address on state television on December 1.

"A new five-sided cooperation platform can be created in the region. I have already brought this idea to the presidents of Russia and Turkey. Both [Turkish President] Recep Tayyip Erdogan and [Russian counterpart] Vladimir Putin reacted positively to this. This is our proposal. We want long-term peace to be established in the region," he added.

Turkey lately committed to building a rail link that would run to its border with Nakhchivan.

Aliyev also focused on the Lachin corridor that runs from Nagorno-Karabakh to Armenia. The current route, essential to the ethnic Armenians who still control part of the enclave following the peace deal, connects Yerevan and Stepanakert, passing through Lachin.

The Azerbaijani leader proposed transferring Lachin to Azerbaijan and laying a road through other locations.

Armenia has returned the Kalbajar, Lachin and Aghdam regions to the Azerbaijanis as part of the ceasefire settlement.

Around 2,000 Russian peacekeeping troops are now stationed in and around Nagorno-Karabakh. A Russian-Turkish truce monitoring centre, expected to use observation drones, is to be created on Azerbaijani territory.