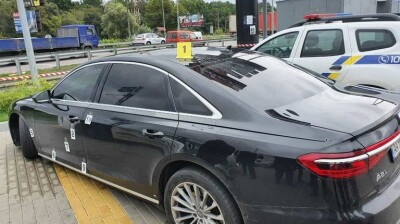 A gunman opened fire on the car of Serhiy Shefir, a top advisor to Ukrainian President Volodymyr Zelenskiy, wounding his driver but failing to injure Shefir
By Cameron Jones in London September 22, 2021

Serhiy Shefir, the top advisor to Ukrainian President Volodymyr Zelenskiy, was unharmed in an assassination attempt on the 22 September outside Kyiv.

His car was sprayed with machine-gun fire, but left the aide unharmed. His driver, however, bore the brunt of the attack and was hit by three bullets and left hospitalised in critical condition.

The police released a statement including a picture of the driver’s side of Shefir’s black Audi riddled with bullets. Some have speculated that the would-be assassins were expecting Shefir to be driving.

“This is serious,” the deputy interior minister, Anton Gerashchenko, said in a brief interview. “It was a real assassination attempt.”

The attack occurred while Zelenskiy was in New York for the United Nations General Assembly meeting, where he had said he planned to speak out against Russia’s military intervention in eastern Ukraine and to rally diplomatic backing for Kyiv.

Shefir, 57, is considered Zelenskiy’s closest confidant. Together with his brother and Zelenskiy in 2003, they founded Kvartal 95, a television production company that produced numerous popular shows and propelled Zelenskiy to nationwide fame as a comedian before beginning his political career in 2019. Shefir was a producer on the comedy show “Servant of the People,” in which Zelenskiy played a schoolteacher who later won the presidency.

The attack occurred at 10am, from a gunman hidden in the woods by the road, according to investigators. Police said they had no suspects at this time and warned the public against speculating as to the identity of the assassin.

Three possibilities have already been suggested by pundits. Top of the list is Russian security forces, who have a track record of assassinations on foreign soil.

The Kyiv attack comes a day after the European Court of Human Rights (ECHR) ruled that Russian military secret agents were “probably” behind the assassination of ex-KGB officer Alexander Litvinenko, who died an agonising death in 2006 after being poisoned in London with Polonium 210.

On the same day British police said they had identified the “third man” involved in the poisoning of Russian double agent Sergei Skripal in Salisbury in 2018 with the Russian military grade nerve agent Novichok. The individual named was Denis Sergeev, a major-general in the GRU that appears to have supervised the failed murder attempt.

Another possibility is Ukrainian mafia groups. Despite years of reforms Ukrainian organised crime retains a powerful grip on the economy and runs multiple rackets, of which cigarette smuggling is one of the biggest. Regular assassinations and murders associated with their business deals are a fact of life and the rampant corruption in Ukraine’s law enforcement and security forces has stymied progress at stamping out the problem.

The other likely possibility is a pushback by the oligarchs who have been in the president’s focus since Zelenskiy gave an oligarch speech in March where he launched a drive to limit their access to government and related money-making schemes. Mykhailo Podolyak, an adviser to Zelenskiy’s chief of staff, linked the attack to the president’s efforts to limit the influence of oligarchs on politics in Ukraine, the New York Times reports.

The oligarchs also have a history of open violence. Former NBU governor Valeriya Gontareva told bne IntelliNews in an exclusive interview that “I fear for my life,” and had been threatened by oligarch Ihor Kolomoisky after she nationalised his bank in 2016. She later quit her job after a coffin with her effigy was delivered to the doors of the National Bank of Ukraine (NBU) while she was still governor. Later her house was torched in an arson attack. The NBU issued a statement at the time calling for an end of the terror campaign against its current and former employees, blaming Kolomoisky by name for the attacks.

While Kolomoisky has been singled out and a special anti-Kolomoisky banking law was passed last year to prevent him from retaking control of PrivatBank, the other oligarchs are also under fire as Zelenskiy's anti-oligarch campaign gathers momentum and closes down corrupt schemes, thereby affecting several of Ukraine’s top businessmen, costing them millions of dollars.

The news will come as a blow to those who believed that Ukraine had moved on from the “oligarch-on-oligarch” turf wars that plagued much of the former Soviet Union in the aftermath of the Soviet collapse in the 1990s. Zelenskiy’s “de-oligarchisation” push may have been the motive behind this attack.

Podolyak called the assassination attempt a “belligerent pushback” against Zelenskiy’s policy to “reduce the traditional influence of shadow oligarchs on social processes,” he told Interfax. “Indeed, we link this attack to the aggressive or even belligerent pushback on the active policy of the head of state,” he said.