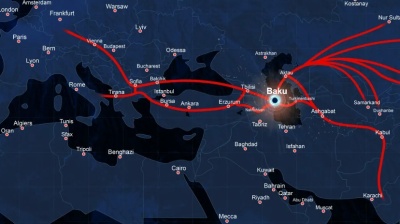 Once laid, the fibre-optic lines across the bottom of the Caspian Sea will open up huge reach across Europe and Asia for Digital Silk Way. / AzerTelecom
By Aida Kadyrzhanova in Almaty November 17, 2022

Central Asia and the South Caucasus have lately been alive with talk of shipping more cargo and oil across the Caspian Sea, but far older plans—concerning the shipping of internet traffic across the inland body of water—now also appear to be moving forward.

The Digital Silk Way is a long-discussed project to form a digital corridor running between Asia and Europe via Azerbaijan and Georgia, providing alternative and extra internet access for a great number of countries.

At the end of October, it was announced that Azerbaijan and Kazakhstan would in 2023 start the construction of fibre-optic communication lines (FOCLs) along the bottom of the Caspian Sea linking the two countries.

Once fully launched, the Digital Silk Way is expected to benefit up to 1.8bn people residing in Central and South Asia, the Caucasus and Middle East. Caspian seabed FOCLs will run across two routes, namely Azerbaijan-Kazakhstan and Azerbaijan-Turkmenistan.

The Digital Silk Way project has been advanced by Azerbaijan’s NEQSOL Holding. Implementation falls to AzerTelecom, an operator that connects Azerbaijan to the global internet network. A partnership of AzerTelecom and Kazakhstan’s TransTeleCom and KazTransCom will roll out the 380 to 400-kilometre-long northern section of the Trans-Caspian fibre-optic cable. An inter-state agreement helps to underpin the project.

"All the countries of Central Asia are interested in the speedy implementation of this project, since the availability of alternative routes plays a big role in providing guaranteed access to the internet for the residents of our countries," said Bagdat Musin, Kazakhstan’s Minister of Digital Development, Innovation and Aerospace Industry.

Difficulties emerged for Digital Silk Way ambitions, when in 2018 Azerbaijan’s NEQSOL decided to acquire Georgian telecom company Caucasus Online, which owns a critical Black Sea cable link. However, Georgia’s communications market regulator, GNCC, last year set out to reverse NEQSOL’s acquisition of 49% of Caucasus Online, claiming that prior consent for the move was not requested.

The Digital Silk Way project has also come under the spotlight of the Organization of Turkic States (OTS). During an OTS working group meeting held on October 25, the potential involvement of member states in the project was assessed.

Stuart Evers, chairman of AzerTelecom International, has emphasised that Digital Silk Way is a private venture and system and “not government-based” nor associated with infrastructure projects such as China’s massive Belt and Road Initiative.

“The system will be carrier-neutral and made available to anyone who wants to use it. One of our ambitions is to open up the region. There is a huge demand for a central direct digital corridor between Europe and Asia, because existing ones are geographically much longer,” Evers said in an interview with the Capacity newsletter.

“The plan is for the project to focus solely on terrestrial fibre and subsea to create a direct link. There are benefits of this system for infrastructure such as satellite base stations, because of the ever-increasing demand and the connectivity it will provide,” he was further quoted as saying.

“We believe that in light of the increase in internet consumption all over the world, this large-scale digital project will contribute to the development of the telecommunications industry in the region, as well as the expansion of business between countries and companies,” he added.

The project also forms part of AzerTelecom’s wider plans. Under the company’s Azerbaijan Digital Hub programme, the telco is working to transform Azerbaijan into a regional digital hub that will facilitate Eurasian data transmission. The initiative is projected to boost the Azerbaijani economy by attracting investments in non-oil sectors and raising capacity in e-services and cybersecurity.

OUTLOOK 2023: South Caucasus
EBRD invests record €13.1bn into its region in 2022
NEMETHY: Key economic and financial drivers to watch in 2023