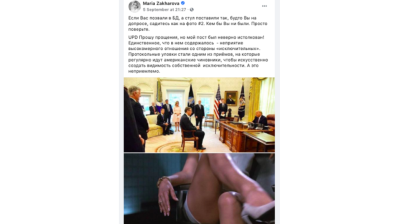 Zakharova, who has a record for being outspoken, wrote the post with a shot from the 1992 film Basic Instinct the day after a deal on economic normalisation was announced at a meeting between Vucic and Kosovan Prime Minister Avdullah Hoti at the White House.

The deal, seen as a step towards normalisation of relations between Belgrade and Pristina and a potential strengthening of US influence in the Western Balkans, clearly ruffled feathers in Moscow, which has maintained close relations with Serbia through its staunch support for Belgrade’s position on Kosovo, which declared its independence from Serbia in 2008.

Zakharova’s controversial Facebook post juxtaposed a picture of Vucic sitting in front of US President Donald Trump’s desk with a shot from Basic Instinct showing Sharon Stone crossing her legs while being questioned — the famous scene that had teenage boys freeze-framing their VCRs to see if the actor was wearing underwear or not.

“If you were invited to the [White House], and the chair was put as if you were in interrogation, sit down as in photo #2 Whoever you are. Just believe me,” Zakharova wrote.

Speaking during a meeting to Brussels for EU-mediated talks with the Kosovan side, Vucic spoke of the Russian official’s “primitivism and vulgarity”, Reuters reported. Defence Minister Aleksandar Vulin added n a separate statement quoted by the newswire that enemies of Serbia and Russia “are delighted with Zakharova’s petty malice”.

Zakharova later amended her post to say: “I apologise, but my post was misinterpreted!" But she stood by her rejection of the “arrogant attitude from the ‘exceptional’ [an apparent reference to the White House].”

Vucic also held a telephone conversation with Russian Foreign Minister Sergei Lavrov on September 6. A Russian foreign ministry statement said the two politicians “expressed their commitment to the all-round development of strategic partnership and political dialogue in accordance with the agreements of the presidents of the two countries”.