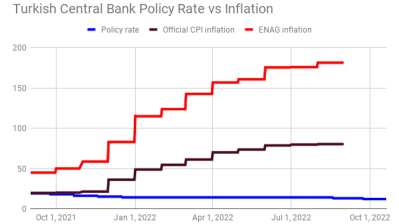 Turkey’s monetary policy committee (MPC) on September 22 cut its policy rate by another 100bp to 12% (chart), again flying in the face of monetary orthodoxy.

As they must, the markets keep trying to assess the likely decision-making of the MPC—which in reality is almost certainly the decision-making of strongman president Recep Tayyip Erdogan—but at this point, the analysts are floundering more than ever. This time around, the majority of analysts assessed that there would be no rate cut. The next MPC meeting falls on October 20.

On July 28, the central bank increased its end-2022 annual inflation forecast to 60% from the 43% it predicted three months ago.

Turkey’s policy rate remains idle while the government controls the monetary conditions via macroprudential measures and non-capital controls. As a result of the government sticks at the bankers’ backs, loan costs and loan growth rates are simultaneously declining at the moment. The government calls this “targeted lending,” which critics contend means providing some “lucky” economic actors with cheap loans, while leaving others with no financing option.

“Targeted” can be taken to make no sense when it comes to the lira supply. There is enough lira and there are perfectly suitable global conditions for another major-scale lira crash. It is not possible to estimate the exact timing of any crash ahead. The government will burn through whatever it can in the FX market before letting the currency plunge into the abyss.

In August, there were some $15bn-20bn of inflows into the reserves. In September, nothing much has been observed. Erdogan’s hunt for FX among the “friendly countries,” said to include Russia, the UAE, Saudi Arabia and Qatar, continues.

Black money has been welcome since 2008 under “wealth amnesty” schemes. All options are tested. Erdogan has even patched up relations with Israel in the pursuit of trade and investment to lift Turkey’s battered economy. On September 19, in New York City, Turkey’s leader—who has once more been putting it about that he is an “economist” even though he has no degree in economics—met with American Jewish group leaders in an encounter organised with the Conference of Presidents of Major American Jewish Organizations.

The Fed has two scheduled meetings in the remainder of 2022, one on November 2 and the other on December 14. So, it seems a combination of one 50bp hike and one 75bp hike is currently on the cards.

As things stand, the market expects a 75bp increase on November 2.

It should be noted that the stress generated by the global tightening is binding the hands and feet of the world. Political crises, the energy crisis, the food crisis, the Ukraine war, the US-China cold war and many interwoven social crises are the current normal on the planet.

November is a real candidate for some really serious shake-ups on the financial markets.

Since September 21, the USD/TRY has been testing the 18.40-level. The media is again in a phase where the headlines speak of the USD/TRY once more breaking records. This is because different data sources provide different figures for where the pair got to last December 20. The market broke down on that day. The USD/TRY jumped around 15-20% d/d from the 13s to somewhere in the 18s.

Investing.com provided a figure of 18.8760 for December 20. However, it later changed the figure to 18.3674. So, according to current figures provided by the website, the USD/TRY has been breaking records again since September 19.

Soon, however, the USD/TRY will put an end to the confusion by rising to unchallengeable record levels. Capital Economics says 24 by the end of the year.

Turkey’s five-year credit default swaps (CDS), meanwhile, remain above the 700-level, while the yield on the Turkish government’s 10-year eurobonds remains above the 10% level.