ANALYSIS: Iran drags UK further into showdown with US as it captures oil tanker 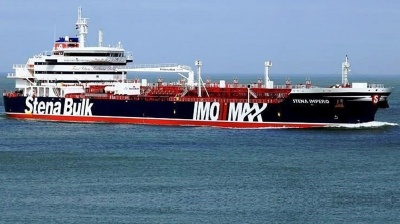 The UK-flagged Stena Impero and its 23 seafarers were forced into an Iranian port by Iran's Revolutionary Guard.
By Will Conroy in Prague July 19, 2019

Iran on July 19 dragged the UK further into its escalating battle directed at what it describes as the US “economic war” waged against the Islamic Republic by seizing two British-linked oil tankers in the Strait of Hormuz and forcing one into an Iranian port.

Perhaps sensing the UK government may be in a vulnerable phase given its ongoing transition to a new prime minister and cabinet—and enraged that British Royal Marines, acting on what Tehran says were essentially orders from Washington, grabbed Iranian tanker Grace 1 off Gibraltar on July 4 on suspicion it was shipping oil to Syria—Iran made good on its threat to capture UK-flagged or owned vessels.

Iran’s Revolutionary Guard said it had taken the British-flagged Stena Impero into port and—according to semi-official Iranian news agency Fars—briefly detained the Liberian-flagged Mesdar owned and operated by Glasgow-based firm Norbulk before sending it on its way.

US President Donald Trump, who, seeking re-election in 2020 may be anxious about being pulled into an unpopular new military conflict in the Middle East, responded to the tanker seizures by saying he would be “working with the UK” on the incident and suggesting that the latest developments justify his harsher approach toward Tehran. “This only goes to show what I’m saying about Iran: trouble, nothing but trouble.”

Military escorts suggested
Nicholas Burns, US ambassador to Nato during President George W. Bush’s administration, suggested resurrecting a 1980s policy of having tankers accompanied by military escorts in the Gulf. “We should form an international coalition of democratic countries to escort every single commercial vessel through the Gulf,” Burns said in an interview with Bloomberg in Colorado. “The Iranians are an outlaw, they’re acting like an outlaw country, they’re trying to shut down one of the major waterways in the world and then hold us up on it and blackmail us.”

However, Iran says it is the US that is acting like an outlaw country. Tehran describes Trump as a “rogue president”.

In May 2018, Trump unilaterally pulled the US out of the 2015 nuclear deal it signed up to with Iran, the UK, France, Germany, Russia and China. The deal protected Iran from heavy sanctions in return for compliance with measures aimed at barring all paths it might take to develop a nuclear weapon. Giving short shrift to the unwritten rules of international diplomacy, Trump walked out of the agreement even though there was no evidence Iran had breached the accord. He said a broader and tougher nuclear deal should be struck that would also address Tehran’s support for militias across the Middle East that are variously enemies of Israel and Arab allies of the US. And he imposed the most punishing sanctions Iran has ever faced to try and force Iran to the negotiating table. In May, the sanctions regime was dramatically beefed up as the US announced it was seeking to drive all of Iran’s crude oil exports—absolutely essential to the Iranian economy—out of world markets. Europe, and particularly the UK which is supposed to have a major influence on US foreign policy given the London-Washington special relationship, has done next to nothing to protect Iran from the US “economic war”, says Iran.

Small craft and a helicopter
The Swedish owner of the Stena Impero said it “was approached by unidentified small crafts and a helicopter during transit of the Strait of Hormuz while the vessel was in international waters” at about 4pm London time. “We are presently unable to contact the vessel which is now heading north towards Iran.”

The Brent crude price climbed more than 1.3% on the news of Iran’s actions against the tankers. Forcing up world oil prices by threatening the secure passage of oil tankers traversing the Strait of Hormuz chokepoint—up to a third of the world’s energy shipments pass through the strait in any one year—and thus hitting the US motorist and Trump’s popularity, is likely one aim of Iran’s increasingly aggressive response to American sanctions.

UK Foreign Secretary Jeremy Hunt—almost certainly set to be defeated by predecessor Boris Johnson in the battle to become the next British PM—said there would be “serious consequences” if Iran does not release the British-flagged tanker. The UK, he said, was not threatening military action but would take a robust approach to the situation.

He added in a statement: “I’m extremely concerned by the seizure of two vessels by Iranian authorities in the Strait of Hormuz. I will shortly attend a COBR [national security] meeting to review what we know and what we can do to swiftly secure the release of the two vessels—a British-flagged vessel and a Liberian-flagged vessel. These seizures are unacceptable. It is essential that freedom of navigation is maintained and that all ships can move safely and freely in the region.”

The Guards, an elite force under the command of Iran’s Supreme Leader Ayatollah Ali Khamenei—that Trump, to the anger of the Iranians, in an unprecedented step has listed as a foreign terrorist organisation—said they seized the Stena Impero at the request of Iranian authorities for “not following international maritime regulations [by drifting out of an international shipping lane]” state television reported. The Revolutionary Guard-affiliated news agency Tasnim said the tanker was seized for breaking three regulations: shutting down its GPS; sailing through the exit of the Strait of Hormuz rather than the entrance; and ignoring warnings.

Gibraltar, meanwhile, was granted the power on July 19, to detain Iran’s Grace 1 oil tanker for another month.

“Caught in between”
“This tanker is important because it is part of the wider tensions between Iran and the United States,” Sanam Vakil, senior research fellow at Chatham House in London, told Reuters. “The EU 3—including the UK—are caught in between, trying to save the Iran nuclear deal while also managing pressure from Washington,” she added, referring to Germany, France and Britain. “So there is a big divergence of strategy on how to proceed and this tanker is a reflection of those divergences.”

The Revolutionary Guard made a first attempt to capture a British tanker six days after the Grace 1 was seized. British warship HMS Montrose intervened to drive off three Iranian military vessels that were attempting to divert the tanker, the British Heritage, towards Iranian territory.

The US has made repeated offers to negotiate its nuclear deal and sanctions stand-off with Iran with the Iranian leadership, but Tehran has each time dismissively said Trump is not a man that would be worth talking to unless the “illegal sanctions” were dropped first.

The reach of the aggressive US sanctions regime directed at Iran was demonstrated on July 19 with reports that two Iranian cargo ships loaded with 110,000 tonnes of maize were unable to depart Brazil because a Brazilian state-owned company was refusing to refuel them.