An anti-Erdogan blueprint: Turkey has just been given reason to hope 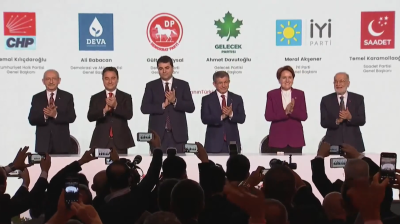 Is it not a fool’s game to think things can improve for Turkey?

This is a country with a deeply damaged democracy, a teetering economy and a plummeting sense of self-esteem. With so many intractable problems, there seems little cause to believe things can ever improve.

On the afternoon of Monday February 28, they met to explain why they believe people in Turkey should dare to hope.

Their ambition – to dismantle Recep Tayyip Erdogan’s executive presidency – is nothing new. The system of one-man rule was imposed on the country following a narrow, contested referendum result and has not delivered the streamlined, efficient government that was promised.

In fact, it’s been quite the opposite: Turkey’s government has become gridlocked.

Part of the reason is that the new system abolished the position of prime minister and the functions of cabinet government and transferred both to the presidency. Gone was the old ceremonial head of state; in came a powerful autocracy that could write and enact whole laws with the stroke of a pen.

But that created a vast tranche of paperwork. One report, possibly an apocryphal one, suggested a Turkish embassy in a Latin American country spent months waiting to appoint kitchen staff because the order to create the position needed the president’s personal sign-off.

Even Erdogan’s supporters accept, albeit discreetly, that the system needs reform.

They would replace it with a “strengthened” parliamentary system.

Broadly, the idea is to return to the arrangement scrapped by Erdogan. The position of prime minister and the principle of cabinet collective responsibility would be restored. Parliament would regain powers to scrutinise and censure the government. The presidency would be a ceremonial position once again.

It essentially means the biggest levers of power would return to 600 members of the Turkish parliament.

But what of this is “strengthened”?

The Gang of Six say it is in the detail of their 44-page plan and it’s worth dwelling on a few snippets.

For instance, it would become harder to topple fragile coalition governments — a recurring ill of Turkish politics in the 1990s, when fickle groups of MPs would shift from one faction to another. The new system would introduce the constructive vote of no confidence, meaning MPs would have to agree on a new government before ending the current administration’s term in office.

Then there’s the proposal to radically lower the electoral threshold – the share of the national vote that parties must receive in an election before they can win a single seat – from 10% to just 3%. That would guarantee representation for Turkey’s Kurdish minority, which was part of the reason the threshold was so high in the first place. 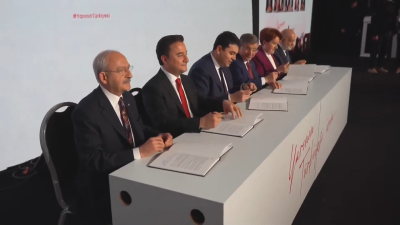 The Six are putting much stock by their plans for a political morality law, which would require MPs to declare their income twice annually alongside any gifts worth more than a tenth of the minimum wage. Parliament would also have the power to reprimand or fine those who abuse the rules.

Another nod towards transparency comes in the move to outlaw omnibus bills — torba kanun in Turkish — which allow the government to bundle up laws covering unrelated topics together and pass them in a single parliamentary vote. It has been a sure way for at least a decade to ensure laws receive as little attention from MPs as possible.

The 44 pages contain a well-developed document with plenty of detail: representatives from all six parties have been meeting for months to thrash it all out.

In historical terms, the fact it has been published at all is astonishing. The six parties are a motley bunch of social democrats, conservatives, hard-line nationalists and political Islamists. It was a stretch just five years ago to believe they could come together like this; in the 1990s, the idea would have been laughable.

Yet they do not unite all walks of life. The Peoples’ Democracy Party (HDP), the main movement for Turkey’s Kurdish minority, is a significant absence given they today represent well over one-tenth of the electorate. Their exclusion is a sign that the Six do not agree on everything.

But a plan is only as effective as its execution. Its success depends on whether the Gang of Six can put it into practice. Can it work, or is it a fool’s game to hope?

The fact is that the six parties will need to score a huge victory at the next general election. They must win at least 360 seats, but preferably 400, between them. They must also defeat Erdogan, the best political campaigner Turkey has ever seen, in a head-to-head personality contest.

Recent opinion polling suggests the parliamentary election, scheduled for June 2023, could go their way and end the 21-year reign of Erdogan’s AK Party, but not necessarily with the huge margin of seats needed to alter Turkey’s constitution.

It is even less certain that Erdogan would lose a presidential election that must be held on the same day, not least because his opponent has not yet been chosen.

The ultimate question, then, is whether the Turkish people will support the plan. Proposals like a political morality law or a lower electoral threshold will not by themselves resonate with voters, who have been crippled by soaring food prices, swingeing energy bills and a palpable decline in their standard of living.

The Six now have to explain how fixing Turkey’s broken government can help fix their broken livelihoods. It will not be easy, but Monday was a strong start.

There is good reason to hope.