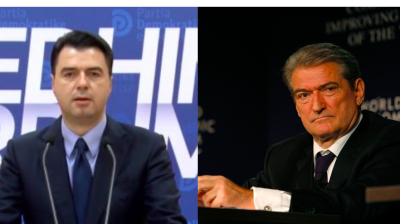 Police stepped in to disperse an angry crowd of supporters of former Democratic Party leader Sali Berisha outside the headquarters of Albania’s main opposition party on January 8.

Berisha has been seeking to oust the party’s current leader Lulzim Basha, who expelled him from the Democrats’ parliamentary group after Berisha was sanctioned by the US, which accused him of involvement in “significant corruption”.

Footage from outside the Democratic Party headquarters shows protesters repeatedly smashing a sledgehammer against the doors. Others propped up ladders to scale the walls of the building.

MPs loyal to Basha inside the building called the police saying they feared for their lives. Local media reported seeing senior party members on the roof of the party headquarters including Jorida Tabaku, Grida Duma and Ervin Salianji, who both filmed themselves from within the building and posted the videos on Facebook.

Police arrived at the scene and used tear gas to disperse the protesters. Numerous injuries were reported.

Berisha had warned in advance that his supporters planned to take control of the Democratic Party headquates.

“YES HAPPENING / Democrats in protest, DP headquarters expected to return to membership,” he wrote on Facebook as the protest began.

Party officials have not yet commented on today’s events, but MP Gazment Bardhi spoke to reporters the previous day, accusing a minority within the party of seeking to “replace the legitimate DP institutions with acts of violence”.

“Sali Berisha, with the violence announced today [Janary 7], wants to turn the PD headquarters into a bunker where he, his family and the drug traffickers and murderers who accompany him on this desperate path against the Democrats will be sheltered,” Bardhi said accodingto a party statement.

“The US is deeply concerned with rising tensions at the Democratic Party headquarters building and protestors' use of force. We call on protest organisers to reject violence and exercise calm. Those inciting violence or undermining the rule of law will be held accountable,” US ambassador to Tirana Yuri Kim wrote on Twitter.

However, Basha said he wouldn’t give in to pressure from Berisha to quit. At a meeting of the party’s national council on December 12, headed by Basha, a statement was adopted declaring that all the steps taken at the previous day’s assembly were illegal.

Basha decided to exclude Berisha from the Democrats’ parliamentary group after the latter was named by the US State Department as persona non grata due to his involvement in “significant corruption” in May.

“In his official capacity as prime minister of Albania in particular, Berisha was involved in corrupt acts, such as misappropriation of public funds and interfering with public processes, including using his power for his own benefit and to enrich his political allies and his family members at the expense of the Albanian public’s confidence in their government institutions and public officials,” the May statement from the State Department said.

Berisha dominated the political scene as prime minister and president from 1991 to 2013. He was Albania’s second post-communist president, holding the post from 1992 to 1997, going on to become prime minister from 2005 to 2013, which makes him Albania’s longest-serving democratically elected leader. He twice headed the Democratic Party, which has been in opposition since he resigned in 2013, when the Democrats were ousted from power by the Socialists led by Albania’s current prime minister, Edi Rama.

Basha was mayor of Tirana from 2011 to 2015, having previously served as first minister of public works, transport and telecommunications and later as interior minister under Berisha.

After the loss of the April 2021 election – which Basha called an “electoral massacre” and claimed was rigged – several high ranking members of the Democratic Party called on him to resign. However, he successfully stood for re-election as party leader in the summer leadership election.