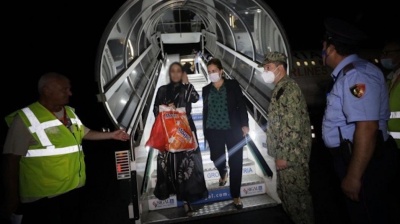 Albania's Minister for Europe and Foreign Affairs Olta Xhacka welcomes the the first plane from Kabul with 121 Afghan citizens at Tirana airport.
By bne IntelliNews September 1, 2021

Albanian Prime Minister Edi Rama has urged fellow members of Nato to do more to support refugees from Afghanistan after the Taliban’s swift takeover of the country.

Albania, along with neighbouring Kosovo and North Macedonia, agreed early on to temporarily house hundreds of refugees from Afghanistan until they could secure visas for the US or other countries. Over 600 people have already arrived in Albania, many of them housed in university halls of residence in Tirana and Durres.

In a widely syndicated article, Rama wrote of how Albania’s history prompted Tirana’s decision to take in refugees.

“Given our history, it is right that we were the first country in the world to offer shelter to thousands of refugees fleeing the Taliban,” he wrote, recalling the shelter given by Albanians to Jews during World War II, followed by the “Red Taliban” of the oppressive communist regime. Despite being one of the poorest countries in Europe, Albania took in half a million refugees escaping ethnic cleansing in Kosovo.

However, Rama argued, “All Nato members must recognise their responsibility.”

“[W]hen confronted with life-or-death choices concerning people whom we are honour-bound to help, our path is obvious. To fail to act now would mean to turn our backs on our own history, and to forget what we have learned from the tragedies of the past century,” he wrote.

He also stressed that as Albania, the poorest country in Nato, is taking in refugees, the humanitarian challenge in Afghanistan should be embraced by all the Alliance’s members.

“Albania is ready to handle its share of the burden that all Nato countries must carry together. But now I ask: if even Albania, the Alliance’s poorest member, can manage its share of the burden, who among other Nato member states cannot? And what political excuse can be powerful enough to defeat our basic human obligations?” Rama wrote.

Some other states from the region, despite being among the poorest countries in Europe, have also welcomed Afghan refugees.

So far, 355 Afghans have been sheltered in Kosovo. They will temporarily stay in the country until they receive visas to be transferred to the US or other Nato member states.

The first group of Afghans arrived in Skopje, the capital of neighbouring North Macedonia, late on August 30. The group consisted of 149 people employed by international organisations in Afghanistan, or their family members, whose lives have been threatened by the Taliban regime. They will be accommodated in hotels on the outskirts of Skopje.