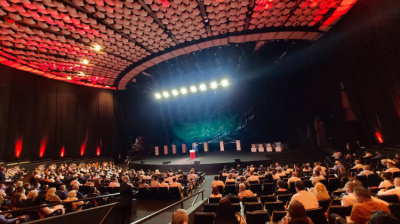 Albanian Prime Minister Edi Rama addresses the ruling Socialist Party at the start of his third term in office.
By bne IntelliNews September 2, 2021

Over 70% of the ministers in the new cabinet announced by Albanian Prime Minister Edi Rama on September 2 are women, making this the most female-dominated cabinet in the world.

12 of the 16 ministers who will serve under Rama in the Albanian cabinet are female, including the heads of the ministries of finance, Europe and foreign affairs, infrastructure and energy and health. Counting the prime minister himself that makes a 70.6% female cabinet.

Until now, the world’s most female-dominated cabinets were in Spain, where just two-thirds of the ministers were women, and Finland (61%), according to UN data compiled at the beginning of 2020; since then a government reshuffle left Spain with a 63% female cabinet. Rama’s previous cabinet was one of just 14 worldwide where more than 50% of the posts were held by women.

As bne IntelliNews reported earlier this year, there are a growing number of women in top government positions in emerging Europe — many of them having come to power with strong reform and anti-corruption agendas — yet overall women's participation in governments and parliaments across the region still lags behind Western Europe.

In Albania, Rama’s Socialist Party was elected for a third term on April 25, becoming the first party to rule for three consecutive terms since the fall of communism.

A poll carried out by Euronews Albania ahead of the reshuffle showed that Balluku and Manastirliu were the ministers voters most wanted to remain in their posts, a preference party attributed to their high profiles as Manastirliu steers Albania through the pandemic and Balluku presides over Albania's road-building efforts.

The most important change was the replacement of Rama’s former deputy Erion Bracen, who announced his departure recently, with Arben Ahmetaj.

Among the new faces in the cabinet are Finance Minister Delina Ibrahimi, the former head of the General Directorate of Taxation, Agriculture Minister Frida Krifca, who previously headed the Agricultural and Rural Development Agency (AZHBR), and Justice Minister Ulsi Manja, previously the head of the Parliamentary Committee on Legal Affairs.

Commenting on the appointments, the Swedish ambassador to Albania, Elsa Hastad, wrote on Twitter: “Hear! The new proposed government in Albania  has proposed a government with more women than in any other country!? Over 70% women #womeninpower.”

“Today Prime Minister @ediramaal presented the names of ministers in his new cabinet: 12 women (incl foreign affairs) & 4 men! Happy that in terms of women empowerment Albania walks the talk. This cabinet must set a new world record, right? Who has done better?” tweeted Besiana Kadare, the permanent representative of Albania to the United Nations.

As well as announcing the new ministers, Rama’s speech to party members also reflected on the Socialists’ third election victory that has kept the party in power since 2013.

“We won the first mandate eight years ago, we were confirmed in the second after four years and like no one before in the history of the Albanian elections we were reconfirmed this year for the third time in a row. This is, in my opinion, the hardest victory we have achieved,” the prime minister said.

However, he warned against becoming drunk on victory and talked of the need for continued effort, saying the party needs “a new force, a new political passion” and a renewed effort to recruit young members including through the launch of a political academy.

Looking beyond the four-year term in government the party is currently embarking on to the local elections in 2023 and general elections in 2025, Rama talked of potentially winning a fourth mandate, warning it will be “even more difficult than the third one”.

The opposition Democratic Party, which has contested the April 25 general election, criticised the choice of ministers. Democratic Party MP Geta Bardeli called the new ministers “faces of corruption and greed”, and accused the prime minister’s decision to appoint more women to the cabinet as “cosmetics to cover up a cruel robbery of power”, a statement posted on the party’s Facebook page said.