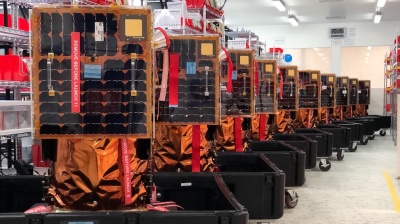 Under the three-year deal with Satellogic, Albania will get priority access to two satellites, to be named Albania-1 and Albania-2. / Satellogic
By bne IntelliNews September 30, 2022

Albania has signed a $6mn deal with US-based Satellogic USA Inc. to develop a dedicated satellite constellation that will enable satellite monitoring of the country’s territory.

Prime Minister Edi Rama, who had previously talked of introducing satellite technology to improve law enforcement, said the satellites will take Albania to a “new era in law enforcement in fighting corruption and strengthening the rule of law”, a government statement said.

Under the three-year deal with Satellogic, Albania will get priority access to two satellites — to be named Albania-1 and Albania-2 — that are expected to be part of Satellogic’s upcoming launch with SpaceX, the company announced.

Satellogic will provide Tirana with satellite imagery capabilities, training government specialists to analyse data from the satellites and provide information to government bodies.

The satellites will help continue efforts to prevent drug cultivation. Albania is one of the top countries worldwide for cannabis cultivation and distribution, the World Drug Report 2022 from the United Nations Office on Drugs and Crime (UNODC) revealed earlier this year.

This is despite well publicised efforts by the Albanian government to eradicate its cultivation, notably with the large-scale operation at Lazarat – dubbed Europe’s ‘marijuana mountain’ back in 2014, shortly before Albania secured EU candidate status. However, reports since then indicate that drug cultivation has been rising since then, and the country also lies on the Balkan route for transportation of heroin to Europe.

Tirana plans to use the satellites to detect other crimes such as illegal construction and logging. They will also make it easier to monitor traffic and border security, and fight wildfires — a growing problem in Albania and other countries in the region.

“With the dedicated satellite constellation, Satellogic will accelerate Albania’s participation in the new space economy. Additionally, these satellites will provide unprecedented, country-wide situational awareness via the best data from space,” said Emiliano Kargieman, CEO and co-founder of Satellogic.

Rama, who participated in the signing ceremony, said: “with the launch of these satellites, we enter another era in law enforcement, in the fight against corruption, in strengthening the state and in equality before the law, but also in the equal right to benefit from all state support.”

According to Rama, Tirana also plans to buy armed drones, which will have a variety of functions complementing those of the satellites, in addition to use against terrorism or a potential enemy.