ALACO DISPATCHES: Why Brussels is unnerved by China’s Balkan overtures 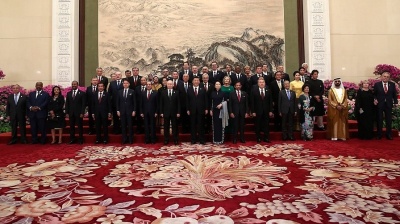 International leaders at the second Belt and Road Forum for International Cooperation in April 2019.
By Yigal Chazan of Alaco July 23, 2019

Beijing sees the former Yugoslavia as a key element of its plan for greater access to European markets, but its investments in the region are a mixed blessing.

China’s growing investments in the Western Balkans, which Beijing sees as an important part of its ambitious Belt and Road Initiative (BRI), may leave some countries in the impoverished region with unsustainable debt and set back their hopes of European Union membership.

China has provided this volatile area of Southeast Europe — comprising Albania, Bosnia & Herzegovina, Kosovo, Montenegro, North Macedonia and Serbia — with billions of dollars in concessionary infrastructure loans, viewing it as a BRI land corridor, integral to the ‘Balkan Silk Road’, in essence a gateway to prized European markets.

Beijing’s trillion-dollar BRI project aims to establish transport and economic linkages between China and the West along a series of land and maritime corridors, stretching across Asia, the Middle East and Africa, with the Western Balkans soaking up much of the funding earmarked for former Eastern bloc countries. Over half of the $9.4bn Chinese investment in Eastern and Central Europe in 2016 and 2017 went to five Western Balkans states.

China has focused its investment on the region’s ports, railways and roads as well as energy facilities. It is improving transport connectivity and power-generation capacity as well as creating much-needed jobs in countries that might otherwise struggle to attract similar volumes of loan financing, given the levels of political and economic risk.

While the EU remains the principal regional trading partner and FDI investor, its funding process can be bureaucratic and often conditional on recipient countries fulfilling strict conditions and undertaking substantial reforms. Chinese loans make limited demands, even when borrowers are potentially at risk of defaulting on repayments.

Beijing has frequently been accused of ‘debt-trap diplomacy’, extending excessive credit aimed at securing economic and/or political advantage. Whether such a fate could befall the Western Balkans is uncertain. The omens, though, are not good. The weak economies of Montenegro, North Macedonia, Bosnia and Serbia owe 39%, 20%, 14% and 12% of their total external debt to China respectively, leaving Podgorica particularly vulnerable. As of last year, 80% of Montenegro’s foreign debt consisted of Chinese infrastructure loans.

An €809mn loan to Montenegro for the first section of a road linking its coastline to the Serbian border was last year projected to swell the country’s debt to 80% of GDP, forcing the government to raise taxes and partially freeze public sector wages. The IMF cautioned that the country could not afford to take on more liabilities to finish the project. Private Public Partnerships have been proposed to finish the project, but their viability has been questioned.

In March, Johannes Hahn, the EU commissioner responsible for enlargement, expressed concern about the consequences of relying on Chinese loans. “China never cares how and if a country is able to pay its loans. And if they cannot pay, there is some pressure that things are transferred into [Chinese] ownership,” he said.

If their economies become increasingly dependent on Chinese financial largesse, Western Balkan states may find the long wait for EU accession extended even further. Beijing will likely continue to take advantage of loose regulations on state aid, procurement, transparency and the environment. But Brussels has suggested that countries in the region could undermine their membership hopes if they fail to comply with the bloc’s stringent stipulations on these issues.

The terms and nature of some Chinese-funded projects have already come under Brussels’ scrutiny. The Hungarian section of a planned $3bn upgrade of the Budapest to Belgrade railway was stalled last year after the EU warned Hungary, a member of the bloc, that the contract for its stretch of the line may have breached a rule requiring public tenders for big infrastructure projects. And earlier this year, Bosnia’s parliament approved a loan guarantee covering €614mn worth of Chinese finance for the expansion of a coal-fired power station in the northern city of Tuzla, despite the move contravening state aid rules and sparking environmental concerns.

The EU has for some time been alert to Russia exploiting its cultural links across the region’s fragile democracies in order to undermine the bloc. Brussels, it seems, has only latterly woken up to the threat posed by China. A foreign investment screening process introduced earlier this year was aimed in large part at deterring Chinese acquisitions of strategic assets, but the measure does not apply to the Western Balkans.

In many ways, Europe benefits from China’s investment in the region, especially transport infrastructure as improved roads and faster railways will be as advantageous to member states as they are to Beijing once the likes of Serbia and Bosnia are firmly ensconced in the European family of nations.

But the potential dividends for the EU come with risks, such as inheriting undesirable coal-fired power stations and roads that have been half built because the money has run out — or, of far greater concern, economies whose debts have reached unsustainable levels through Chinese lending.

For Beijing, there is also a downside to all of this. If Western Balkans investment is all about placing China in a commercially strong position once the region is eventually incorporated into the bloc, irresponsible lending and the fostering of weak regulatory environments could discourage the very reforms the EU requires of aspirant members. That could leave the Western Balkans’ EU membership bids in limbo and set back Chinese hopes of increased European market penetration.

Yigal Chazan is the head of content at Alaco. Alaco Dispatches is the business intelligence consultancy’s take on events and developments shaping the CIS region.

Foreign investment in the more productive sectors of the west Balkan's economy may be put at risk by skills shortages driven by high levels of migration.

Since the spring of 2014, Russia has handed out nearly 200,000 Russian passports to Ukrainians living in the Donbas and Luhansk “People’s Republics.”

At his address to the nomenklatura, Belarus President Alexander Lukashenko said a remarkable phrase: “I’ll accept any of your decisions. But don’t you dare betray me! Betrayal won't be forgiven even in heaven."

There is no end to the COVID-19 pandemic in sight, but the new normal that will emerge could benefit the countries of Central Eastern and Southeastern Europe (CESEE), due to the new opportunities that will arise.