Pity the tourism marketing official who has the job of attracting visitors to explore the mysteries of the faraway land of Kyrgyzstan—for on June 15, after 675 years of detective work, researchers announced that they had discovered the origins of the Black Death in a region that is now part of northern Kyrgyzstan.

People who died in a 14th-century disease outbreak in the region, Tian Shan, were killed by strains of the plague-causing bacterium Yersinia pestis that gave rise to the pathogens responsible several years later for the Black Death, according to a study of ancient genomes conducted by the Max Planck Institute for Evolutionary Anthropology in Leipzig, Germany. 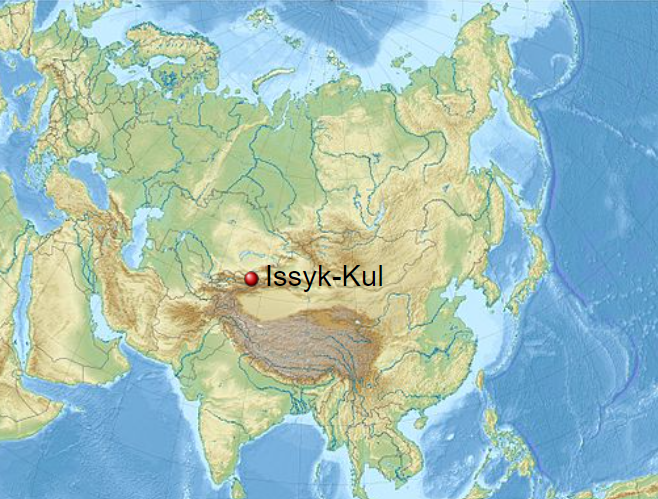 The epicentre of the bubonic plague has been pinpointed to a location near Issyk-Kul in Kyrgyzstan (Credit: Uwe Dedering, cc-by-sa 3.0).

“It is like finding the place where all the strains come together, like with coronavirus where we have Alpha, Delta, Omicron all coming from this strain in Wuhan, [China],” Johannes Krause, a palaeogeneticist at the institute in Leipzig, Germany, told Nature. Krause co-led the study, published on June 15 by the journal.

China hosts some of the world’s greatest genetic diversity of modern Y. pestis strains. That hinted at an East Asian origin for the Black Death. “There were all kinds of hypotheses in the literature. And it was really known where it exactly came from,” Krause told the journal.

Between 1346 and 1353, the Black Death, otherwise known as the bubonic plague, the "Great Mortality" and the "Pestilence", laid waste to western Eurasia, killing up to 60% of the populace in some places. The Caucasus and other locales in Central Asia have previously been put forward as potential epicentres of the plague.

The Black Death is thought to have travelled from Asia to Europe on flea-infested rats living on trade ships, with the first recorded case in England traced back to June 1348. Across Europe, it wiped out around 45% of the population.

It is possible that the Black Death originated in marmots, the bushy-tailed, stocky rodents that are one of the most prevalent bubonic plague carriers in the Tian Shan region, before spreading to humans. Tian Shan is on the ancient Silk Road trade route, a route along which the plague could have hitched a ride west. The researchers noted that Nestorian Christian communities living near Kyrgyzstan’s Lake Issyk Kul in the Tian Shan mountain range, at the heart of the old Silk Road, were involved in international trade.

Nature related how several years ago, Philip Slavin, an economic and environmental historian at the University of Stirling, UK, and a co-lead author of the Max Planck study, came across records from a pair of 14th-century cemeteries in Kyrgyzstan that, he thought, might hold clues to the origins of the Black Death. The cemeteries, known as Kara-Djigach and Burana, held an unusually high number of tombstones dated to 1338 and 1339, and 20 of those made explicit reference to a pestilence.

“When you have one or two years with excess mortality, it means something funny is going on there,” Slavin said at a press briefing.

To determine whether the burials held any relevance to the later Black Death, Slavin worked with Krause to track down the remains from the Kyrgyz cemetery. They had been excavated in the 1880s and 1890s and moved to St Petersburg, Russia. The team, led by archaeogeneticist Maria Spyrou at the University of Tubingen, Germany, sequenced ancient DNA from seven people whose remains were recovered, discovering Y. pestis DNA in three burials from Kara-Djigach.

A pair of full Y. pestis genomes gleaned from the data demonstrated that the bacteria were direct ancestors of strains linked to the Black Death. Those strains included a Y. pestis sample from a person who died in London that Krause’s team sequenced in 2011. The Kara-Djigach strain, Nature reported, was also an ancestor of the vast majority of Y. pestis lineages around today—a sign, Krause said, of an explosion in Y. pestis diversity shortly before the Black Death. “It was like a big bang of plague,” he said at the press briefing.

Kyrgyzstan, Uzbekistan warn citizens not to sign up to fight for Russia in Ukraine
CENTRAL ASIA BLOG: Media risk underplaying significance of Tajikistan’s attack on Kyrgyzstan says academic
PANNIER: Putin arrived with little to offer an SCO summit that showed no real clout