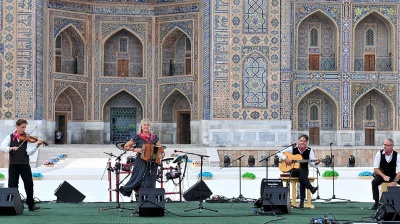 Uzbekistan's banking fraternity will need to tune into a livelier beat.
By Scott Osheroff in Singapore January 27, 2020

On January 21, the Central Bank of Uzbekistan issued London-listed TBC Bank of Georgia with preliminary permission to establish a joint-stock commercial bank in Tashkent. In order to receive a banking licence, TBC must incorporate a local subsidiary and fulfil its capital and technical requirements, according to the central bank. With TBC’s technological infrastructure, which has helped it grow rapidly in recent years in the area of consumer lending, its entrance into Uzbekistan could be the catalyst for the modernisation of the antiquated banking sector in Uzbekistan.

With 30 banks in Uzbekistan, over the years the financial services industry has benefited from largely protectionist measures. There are only four local subsidiaries of international banks—Ziraat Bank from Turkey, KDB from Korea, Tenge Bank from Kazakhstan and Saderat from Iran. As the market has historically been closed, banks have had little incentive to digitise, provide good customer service or eliminate bottlenecks as there was more than enough business without having to address a need to invest-to-compete.

With some foreign banks entering the market—Halyk Bank’s entrance in 2019 came through its local subsidiary Tenge Bank, and the TBC arrival is ahead—the banking landscape is set to change as foreign banks have access to cheaper capital than their domestic peers and are also more likely to be willing to fight for market share. TBC in particular offers an edge of scalability through its plans for a digital banking platform focused on consumer finance which will decrease friction for clients and enable it to expand its presence nationwide, focusing on customer service and a diverse product offering, rather than a nationwide physical branch buildout.

During the spring of last year, TBC acquired a 51% stake in Payme, the largest fintech mobile application in Uzbekistan. With over 1.3mn users, it enables bank and stock brokerage accounts to be synced, money to be transferred, loans to be repaid and utility bills to be paid, among many other options.

The ramifications could be significant for local banks that are only just waking up to the fact that cut-throat competition is upon them. In contrast to poor customer service, long lead times on loan approvals and the need to regularly visit physical branches where long waits can ensue, TBC offers the promise of a relatively seamless platform which could help to transform Uzbekistan’s banking sector and also decrease friction costs for financial services, particularly in the countryside.

The future of Uzbekistan’s financial services industry is bright and growing fast, yet the under-capitalisation of the local banking sector needs to be resolved if local banks are going to compete with the likes of a TBC. As Uzbekistan continues its reforms and opening up to the world, the sector will be an exciting one to watch. Of course, if TBC does indeed obtain its banking licence with no hitches, the one group that will clearly benefit is that of the average consumer.

Scott Osheroff is CIO of the Asia Frontier Capital (AFC) Uzbekistan Fund, which was launched in March, 2019. It aims to achieve long-term capital appreciation for investors by capturing the value and growth potential in the recently liberalised economy of Uzbekistan.

Russian state spending significantly accelerated in January, fulfilling the unusually high proportion of annual spending plan for that month as the government plays catch up with the national projects

TRACE: A closer look at corruption risk in the western Balkans

Corruption is a serious problem throughout emerging Europe, but there are questions about whether the focus on perceptions of corruption is the best way to evaluate the effectiveness of a country’s anti-corruption efforts.

ING: Poland's growth slows sharply and the outlook is poor

Annual GDP data implies that growth slowed in the final quarter of last year to a modest 3% year-on-year vs 3.9% in the third quarter. ING’s 3% y/y growth forecast for 2020 is at risk for a downgrade.

ASH: Putin moves from "Fortress Russia" to "Go for Growth"

Things are happening in Russia – with change signalled both in the political and the economic policy settings. Russia's fiscal fortress is strong enough to make it impervious to sanctions, so time to focus on growth

It is now over a year since the Romanian government, in December 2018, unexpectedly introduced draconian taxes across different sectors, which sent equities into a spin. Yet it finished the year with a 39% return on equities.

ING: Russian budget spending plays catch up in January
3 hours ago
TRACE: A closer look at corruption risk in the western Balkans
7 days ago
ING: Poland's growth slows sharply and the outlook is poor
18 days ago
ASH: Putin moves from "Fortress Russia" to "Go for Growth"
19 days ago
EAST CAPITAL: Romania — can 2019’s best frontier market continue to perform in 2020?
22 days ago