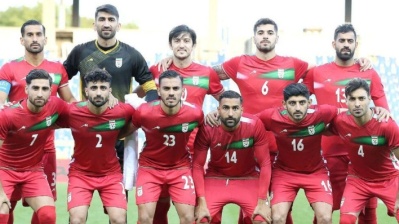 Any outward signs of support for the anti-regime protesters in Iran from the Iranian football team during their match with England would unsettle the country's clerical rulers. / www.teammelli.com
By bne IntelIiNews November 20, 2022

Anti-regime protests raged on at Iranian universities and in various cities at the weekend, gaining a momentum in some areas that ran counter to the argument of officials that the protests would soon fizzle out.

With the Iranian football team due to take on England in the second match of the FIFA World Cup finals in Qatar on November 21, the authorities will be nervous about any televised unmissable signs of solidarity with the protesters from squad members that could further fuel the unrest. And some declarations of support have already been carefully phrased and delivered in the full glare of the global media. Germany, meanwhile, is reportedly irritated with FIFA for failing to take a position on events in Iran.

Iran’s Supreme Leader Ayatollah Ali Khamenei on November 19 turned his attention to the threat of further disruptive labour action, warning that the country's "enemies" may try to mobilise workers after failing to bring down the Islamic government in more than two months of protests.

"Until this hour, thank God, the enemies have been defeated. But the enemies have a new trick every day, and with today's defeat, they may target different classes such as workers and women," state television quoted Khamenei as saying.

Though there have been some labour strikes in support of the protesters so far, they have been limited.

An iconic symbol of the protests has been women burning headscarves to denounce Iran's strict Islamic dress code for women. The unrest erupted in mid-September after 22-year-old Kurdish-Iranian woman Mahsa Amini died in the custody of Tehran’s “morality” police after she was detained for wearing attire deemed “inappropriate” and a hijab, or headscarf, in an “unacceptable” way.

Human Rights Activists News Agency (HRANA) said on November 19 that sit-down strikes and protests were taking place on two dozen university campuses in Tehran and in major cities including Isfahan, Tabriz and Shiraz.

HRANA also said that as of November 19, 410 protesters had been killed in the unrest, including 58 minors. A total of 54 members of the security forces were also recorded as killed, it added, while more than 17,251 people had been arrested. A handful of those detained have so far been sentenced to death by Islamic courts.

In the southwestern city of Izeh, hundreds of mourners attended the funeral of a young boy who, his family say, was killed by security forces. Reports said mourners chanted anti-regime slogans and ridiculed the official account of the boy’s death.

There have also been some sketchy reports of protesters apparently setting fire to the ancestrl home of  the founder of the Islamic Republic, Ayatollah Ruhollah Khomeini.

Given Amini’s Kurdish background, protests have been particularly strong in Iran’s northwestern Kurdish region, where most of the 10mn Kurds among Iran’s population of around 85mn live. The weekend brought more evidence that the country’s clerical rulers have stepped up the crackdown on the region, sending in convoys with heavily armed troops.

In a statement, carried by state media, Iranian armed forces confirmed "strengthening" their forces in the region to confront "terrorist separatist groups".

Tehran has several times alleged that Iranian Kurdish groups based across the border in Iraq have been inciting anti-government protests in Iran and smuggling weapons into the country. The Associated Press reported on November 18 that a senior Iranian military official has threatened Iraq with an unprecedented ground military operation if Baghdad does not disarm the Iranian Kurdish opposition groups and fortify its border with Iran.

On November 19, Radio Farda reported that the head of Iran's national boxing federation, Hossein Soori, had said he was refusing to return to his country from a youth boxing tournament in Spain in a show of support for the protests.

Ukraine official tweets ‘Did warn you’ after drone attack in Iran