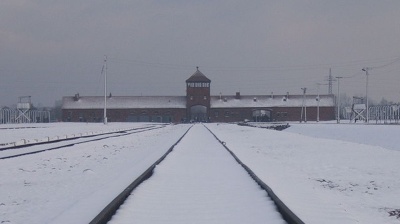 The 75th anniversary of the liberation of the Nazi death camp in Auschwitz gathered survivors and politicians at an event overshadowed by politics – global and national.

Poland, which Nazi Germany made the location of the “final solution” – the plan to exterminate Europe’s Jews, hosted the solemn ceremony after a diplomatic row with Russia led President Andrzej Duda to skip the World Holocaust Forum in Jerusalem earlier this month.

But politics also resonated at the site of the former death camp, the biggest and the deadliest of several extermination camps that the Germans set up on the occupied Polish territory in the 1940s. Some 1.1mn people perished in Auschwitz, around one million of them Polish and European Jews.

We will “always nurture the memory of and guard the truth about what happened here,” Duda said in a speech at the former camp.

“Distorting the history of WWII, denying the crimes of genocide and the Holocaust as well as an instrumental use of Auschwitz to attain any given goal is tantamount to the desecration of the memory of the victims whose ashes are scattered here. The truth about the Holocaust must not die. The memory of Auschwitz must last so that such extermination is never repeated again,” Duda added.

While the speech by the Polish leader carried a universal message, it was also a swipe at Russian President Vladimir Putin.

Poland and Russia have clashed over history in recent weeks in a tit-for-tat exchange that eventually led to Duda not attending the World Holocaust Forum after being denied a speaking slot there.

The event in Jerusalem was organised by Israeli President Reuven Rivlin, the Yad Vashem institute of Holocaust research, and the Israeli foreign ministry in cooperation with the European Jewish Congress, which is headed by Moshe Kantor, a friend of Putin’s.

Putin spoke in Jerusalem, his speech coming under fire from historians for distorting facts about the Holocaust. Putin said, for example, that 40% of the Jews who died in the Holocaust were citizens of the Soviet Union – a stark misrepresentation of what historians agree was one-sixth of the victims. Putin did not mention Poland in his Jerusalem speech.

Not inviting Duda to speak in Jerusalem was a slap in Poland’s face. Poland lost 90% of its pre-war Jewish population of three million. The educational role of the Auschwitz Memorial and Museum – maintained and partially financed by the Polish state – is highly regarded worldwide.

Earlier, Warsaw and Moscow traded blows, accusing each other of cooperation with the Nazis prior to, and in the early stages of, World War Two. Russia is especially sensitive to Poland's highlighting the fact that the Soviet Union was an ally of Hitler's prior to the war, resulting in its invasion of Poland alongside the Germans in 1939. Moscow says that is belittling its later effort to defeat the Nazis after the two former allies turned against each other.

Politics also closed in on Duda during the event at Auschwitz. Marian Turski, a survivor of the camp, talked about the importance of standing up to defend the constitutional order and warned against the dangers of eroding democracy, which is what the Polish authorities are often accused of.

“Don't be indifferent when you see history being tweaked to serve current politics. When minorities are being discriminated against. Or when authorities try to violate the social contract," said Turski.

Poland’s Allegro seeks valuation of up to PLN8.1bn in upcoming IPO

Both sides accuse each other of starting clash. Russia calls for immediate ceasefire. Turkey pledges to stand by Azerbaijan.

As banking regulator follows surprise rate hike with relaxation of lenders’ FX swap limits, all the signs are that the Erdogan administration is in the market for a shot in the arm that, ultimately, can only do more damage.

Even former leader of the Soviet Union Mikhail Gorbachev has thrown his support behind the Belarusian population protesting against self-appointed President Alexander Lukashenko.

Tanker tracking companies, meanwhile, see September surge in Iranian crude shipments with one describing “levels we haven’t seen in a year and a half”.

“Putin’s chef” follows through on threat to bankrupt Navalny, bailiffs seize his apartment

Russian bailiffs have seized the Moscow apartment of Alexei Navalny as the close personal ally of Russian President Vladimir Putin, Yevgeny Prigozhin, follows through on threats to ruin the opposition activist.

Major fighting erupts between Armenia and Azerbaijan over Nagorno-Karabakh
9 hours ago
TURKEY INSIGHT: Follow the (hot) money
2 days ago
Lukashenko has isolated himself from the rest of the world with a secret inauguration
2 days ago
Iran’s oil minister openly admits forging export documents to dodge US sanctions
2 days ago
“Putin’s chef” follows through on threat to bankrupt Navalny, bailiffs seize his apartment
2 days ago