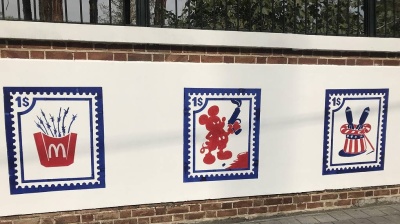 The unveiling of the murals was turned into a big occasion. Numerous Iranian officials including the commander of the Revolutionary Guard attended.
By bne IntelliNews November 3, 2019

Iran has unveiled new murals of anti-American graffiti on the outside walls of the former US embassy compound in Tehran to mark the 40th anniversary of its capture by Islamic revolutionary students.

The works (see more here) include an ominous Mickey Mouse standing with a smoking gun in his hands and McDonald's food packaging with barbed wire sticking out instead of French fries. Another shows bats surrounding a US Global Hawk drone, shot down in June by Iran which claimed it was on a spying mission over its territory. One piece features a doctored US presidential seal with an added Star of David—seemingly a reference to Washington’s close ties with Iran’s arch-enemy Israel—and an eagle holding drug syringes and bombs. 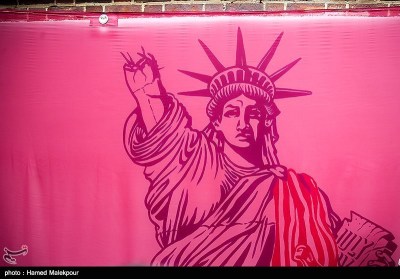 State media reported that the murals were conceived in line with themes such as “The Decline of America and the West” and “America’s crime around the World and in Iran”. Behnam Amini, who heads the museum at the embassy, was quoted by Fars news agency as saying the volunteer Basij paramilitary group had recruited artists “committed to the Islamic Revolution” to draw the 14 murals.

On November 4, 1979, a group of Iranian students seized the US embassy in Tehran and its staff. They demanded that Washington extradite the fled last Shah Mohammed Reza Pahlavi to Iran for trial and return the wealth he had removed from the country (Pahlavi died of cancer in exile in Egypt in July 1980 aged 60). Some 52 of 66 Americans taken hostage were held captive for 444 days. They were released on January 20, 1981, following the election of Ronald Reagan.

Iran’s Supreme Leader Ayatollah Ali Khamenei remarked that the “US is now wilder and ruder” than it was 40 years ago as he reflected on relations with Washington on the eve of the anniversary of the storming of the embassy compound and the ensuing hostage crisis, Fars News Agency reported on November 3.

Relations between Iran and the US are in the worst state they have ever been since the embassy capture shortly after the Islamic Revolution because of US President Donald Trump’s decision in May last year to unilaterally walk out on the nuclear deal between Iran and six major powers and attempt to crush the Iranian economy with sanctions.

In an address to a gathering of religious students in Tehran, Khamenei said the Iranian revolution was entirely based on opposition to the hegemony of the US and that that remained the case to this day as it was a fundamental tenet of the Islamic Republic’s philosophy.

“From the 1979 revolution, the US has resorted to every measure to harm the Iranian nation, such as plotting coups, provoking anti-Iranian moves and separatist movements and blockades,” Khamenei said.

He said that Iran in response did not rest on its laurels but was proactive and “sent the US to the corner of the ring”.

“But the Islamic Republic’s most important response to the US plots has been that it has blocked the US’s way through for a renewed arrival and infiltration into the country,” the supreme leader emphasised.

The former US embassy has been under the control of the Islamic Revolutionary Guard Corps (IRGC) since it was taken over.

Khamenei, who referred to Iran and the US as “implacable foes” also said that Tehran would maintain its ban on talks with the US. That comes as another blow to efforts by the Trump administration to force Iran to the table with its sanctions-led “maximum pressure” campaign to renegotiate the nuclear deal, partly to place ultra-tough controls on Tehran’s nuclear and ballistic missile development programmes and partly with an eye on greatly restricting Iran’s role in Middle East affairs.

“One way to block America’s political infiltration is to ban any talks with America. It means Iran will not yield to America’s pressure. Those who believe that negotiations with the enemy will solve our problems are 100% wrong,” Khamenei, who is Iran’s top political authority, said, according to IRIB.

After the success in creating the Islamic Republic, the US embassy was referred to by Iranian officials as “the Den of Spies”.

“The US has not changed since decades ago ... it continues the same aggressive, vicious behaviour and the same international dictatorship,” Khamenei added. “Iran has a firm, iron will. It will not let America return to Iran.”

Khamenei also poured scorn on French President Emmanuel Macron for trying to arrange talks between the foes on the sidelines of the UN General Assembly in New York in September.

“The French president, who says a meeting will end all the problems between Tehran and America, is either naive or complicit with America,” Khamenei said in remarks reported by state television.

The unveiling ceremony for the murals was attended by numerous Iranian officials, including Brigadier General Hossein Salami, commander of the Islamic Revolutionary Guard Corps (IRGC), and other senior military officials.

“The US is the major exporter of weaponry and the main party of different wars across the globe, while in America articles on ensuring peace in the world feature in big discussion,” Salami said at the event.

He added: “US military power illustrates that it seeks nothing more than creating chances for destroying the earth. While Americans speak of combatting mass destruction weapons, their country is the first that achieved atomic weapons and used them.”

In response to the embassy capture and hostage taking, Washington under US President Jimmy Carter on November 14, 1979, stopped buying Iranian oil, froze Iranian deposits in American banks and their foreign branches and banned the sale of military equipment parts to Iran.

After the severance of diplomatic relations between the US and Iran in April 1980, bans were imposed on the export of American goods to Iran, including food and medicine, on money transfers the country and the imports of Iranian goods.

No enthusiasm for July 15 election in North Macedonia amid relentless coronavirus epidemic
1 day ago
Mongolia to go ahead with Naadam festival, but with no tourists
4 days ago
Protests pose unprecedented threat to Turkmenistan’s authoritarian government
4 days ago
Profits of Ukraine’s banks still ahead of last year, but first signs of crisis impact visible
5 days ago
Suma Chakrabati leaves the EBRD a greener bank
8 days ago